Dudley – A City In The Making 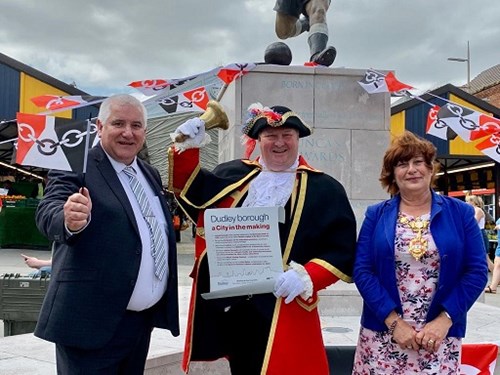 This followed an announcement by the Government of a competition to mark the Queen’s Platinum Jubilee celebrations in 2022, when Her Majesty the Queen will be the first British monarch to reach 70 years on the throne.

Following Dudley’s declaration, the borough now has until the Government deadline of December 8 2021 to draft a submission which we believe will see Dudley borough become the City of Dudley in 2022.

This is where you come in - we want to hear what you love about the borough you live in, so we can make sure we don't miss anything out of the submission. 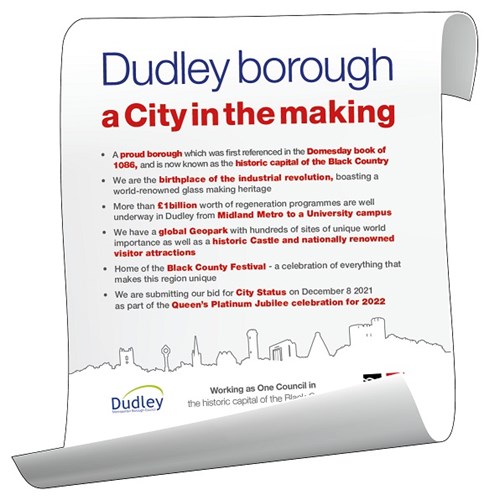 Dudley borough is the proud historic capital of the Black Country and we believe we are a city in the making.

More information about our announcement can be found in the media release. 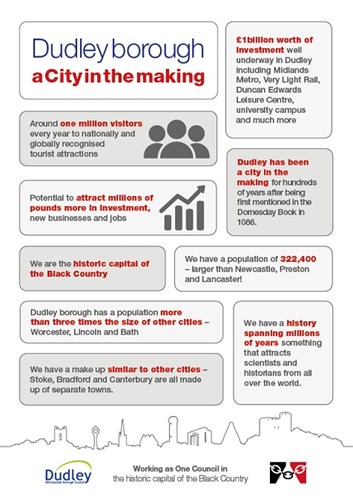 The whole borough - including Stourbridge, Halesowen and Brierley Hill.

This is not unusual – nearby Stoke-on-Trent is a good example of a city made up of a number of different towns. They have even more than us with six – Hanley, Burslem, Fenton, Longton, Stoke-on-Trent and Tunstall.

We also have a bigger population than Stoke – so why not us?

No - and if similar past awards of City status are any indication, there will be considerable competition amongst the entrants.

But even just participating in the competition shows our ambitions for the future - and further raises the positive profile of the borough on the national stage.

The City Of Dudley would boast a history and heritage most cities around the world could only dream of. Dudley’s past takes some beating - from millions of years of our geological significance, to the Domesday Book reference of 1086 and its medieval castle, right through to its pivotal role at the centre of the Industrial Revolution.

This proud past is coupled with today’s billion-pound regeneration schemes, which are a match for any established city and are transforming and modernising the landscape of the borough.

We’re forging a future for all which makes us firmly believe that Dudley really is a city in the making.

Towns and boroughs across the UK have received the invitation from the Government. So far, those that have made their intention to bid include Swindon, Medway, Reading, Southend-on-Sea and Dumfries.

These honours are rare marks of distinction and the number of awards will depend on the strength of the applications received. In the last round of city bids back in 2012, Chelmsford, Perth and St Asaph were all named cities.

The honour of becoming a city would give Dudley greater status and prestige on the national and international stage. Whilst it does not bring increased funding directly, it would open up doors from national and international investors to continue to support our ambitious regeneration plans for the future. It would also help to attract more start-up businesses and established businesses to re-locate in Dudley, providing a further boost to the local economy.

All local authorities across the United Kingdom who believe that their town or borough deserves consideration for these rare honours are invited to apply. The city status competition will also be open to eligible applications from the Crown Dependencies and Overseas Territories.

Entry guidelines and an application form have been published on Gov.uk website.

We are hugely proud of where we live and work and we hope you are too.

To support our bid for city status, we would like to hear from you with details of your favourite things about living in Dudley borough so we can ensure we don’t miss anything out of our bid.

To give us your views please email us at cityinthemaking@dudley.gov.uk and through our social channels using the following hashtags: #CityofDudleyBid and #ACityInTheMaking