£100,000 worth of illegal tobacco seized from Dudley home

Illegal tobacco with a street value of nearly £100,000 has been seized from an address in the borough this morning.

Dudley Council’s trading standards team led an operation assisted by police which saw a search warrant served on a home in Dudley at around 7.30am.

Officers found a number of people asleep at the property and seized boxes full of illegal tobacco and large amounts of counterfeit packaging from several rooms in the house. 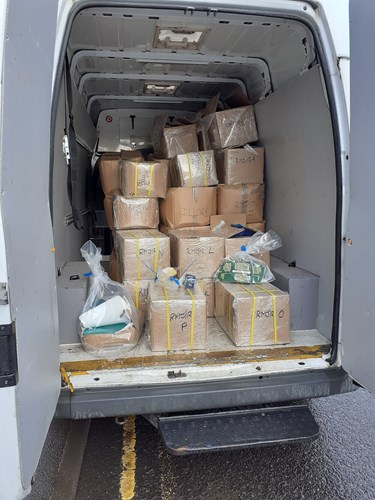 The haul was removed for further investigation, but it is estimated to have an approximate street value of nearly £100,000.

Selling illegal tobacco is a crime and today’s seizure sends out a strong message, both from the council and the police, that we won’t tolerate it.

While all smoking is harmful, illegal tobacco is sold at low prices and without the necessary health warnings. It makes it easier for children and young smokers to get hooked and harder for people to quit.

These crimes impact negatively on health and our community.

It deprives legitimate businesses of revenue and robs the tax payer of money that could be spent on schools and hospitals.

Anyone with information concerning illegal tobacco in the borough is urged to contact the anonymous hotline on 0845 894 1008 or speak to trading standards directly on (01384) 818872.