16 years of PCSOs in Dudley

The Mayor of Dudley has thanked four Dudley’s PCSOs for their service to the borough over the last 16 years.

It has been 16 years since the first ever Police Community Support Officers (PCSOs) joined the West Midlands Police.

16 PCSOs walked the streets for the first time on 18 August 2003. They began their duties following training at Dudley Police Station. Four of these original officers continue to serve with three serving in Dudley Borough for the whole of their service and one now in Smethwick. 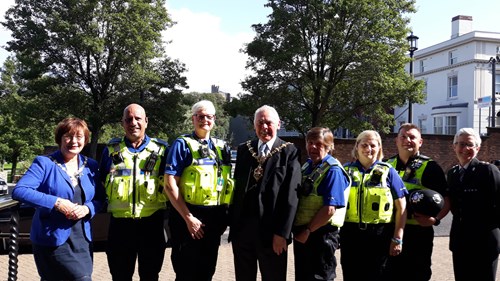 While they don’t have all the powers of a police officer, PCSOs have become familiar and reassuring faces in communities across the borough, working as part of the neighbourhood policing team to build strong and enduring relationships with local people.

The Mayor of Dudley welcomed them to the Mayor’s Parlour following a tour of the Council Chamber. The group talked about their experiences on the beat, their affection for the communities they serve and the rewards of the work they do.

I’m really glad I was able to welcome the officers to the Council House. We’re all aware of the important work they do and their contribution to the wider work of the West Midlands Police Force.

I know that for many people, seeing the PCSOs in their communities is really reassuring. They’re friendly and approachable, professional and highly dedicated to service our local communities.

I’d like to thank them and all of the PCSOs who help to make the borough a safer place to live.

Our PCSOs are the absolute foundation of neighbourhood policing.

We are delighted to recognise 16 years of dedication to our community and it says everything about the community spirit of Dudley that every one of our four PCSOs who remain from the original West Midlands Police cohort who joined in 2003 have either served in or continued to serve the people of Dudley borough.

PCSOs were introduced under Police Reform Act 2002 - starting in the Metropolitan Police area - PCSOs are meant to help reduce crime and anti-social behaviour.

PCSOs work with schools and young people as well as supporting crime and disorder reduction partnerships.