A week of events for Armed Forces Day

There’s lots to be excited about in the run up to this year’s Armed Forces Day event, which is only a few days away.

The annual event is being held in association with Black Country Housing Group and promises to be bigger and better than ever before. 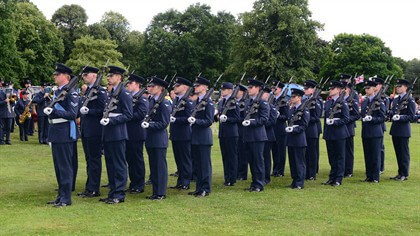 The free family day out will be held in the grounds of Himley Hall on Sunday July 1 from 11am to 5pm and has a fantastic line up in store for visitors.

It’s prefaced by Fly the Flag on Monday 25 June, when the Armed Forces Flag will be flown from the top of the Council House in Priory Road for the week leading up to Armed Forces Day. The Mayor, Councillor Alan Taylor will lead a civic ceremony from 11am in Coronation Gardens, Dudley. All are welcome.

Reserves Day on Wednesday 27 June, is an opportunity to recognise and celebrate the important part that Reservists play in supporting the UK’s defence capability. Formerly known as ‘Uniform to Work Day’, Reserves Day provides an opportunity for the whole of the UK to celebrate the Reserve Forces and for Reservists to show pride in their service and can be supported with the #SaluteOurForces hashtag on social media.

The highlight of the week however will be the Armed Forces Day event itself at Himley Hall and Park. Topping the bill will be a parachute display by the Wings Parachute Display Team at around 12.30 (depending on the weather) with seven parachutists set to dive from their plane over the Himley Park, landing in the main arena. The formal element of the day, the HM Armed Forces Veterans Badge presentation to veterans will be held later in the afternoon.

The Bluebird Belles, a vintage vocal harmony trio, and RAF Cosford Voluntary Band will perform on the day and there will be a display of current and historic military vehicles.

In the main arena, visitors will be wowed by the spectacular Beating Retreat, which will bring together marching bands, standard bearers and serving personnel from the Royal Air Force for a military tradition dating back centuries.

During the day there will be heaps of entertainment throughout the park for all ages.  Activities include Punch & Judy shows, story telling sessions and vintage rides. There will also be a paint ball gallery, archery and a rifle range at which adults and older children can try their hand.

In the park vintage homewares and clothing will be for sale in the pop-up Halfpenny Antique and Vintage Centre tent and Lil’s Parlour will be serving ‘tea for the troops’ from her mobile 1940s inspired tearoom.

The Land Girls will entertain with their 1940s victory show, with classic war time songs for crowds to sing-a-long to, and the RAF Cosford Voluntary Band will be performing military and last night of the proms classics throughout the day.

In the hall itself, there are a series of historical talks on WWI, and visitors can pop into the tea room, the coffee lounge and look round some of the exhibitions in the hall.

The popular youth marching band competition will take place in the main arena throughout the morning and early afternoon.

There will also be an opportunity for people to meet with reservists and regulars who are serving with local units including B Squadron the Royal Yeomanry, the 4th battalion the Mercian Regiment, RAF Cosford and 63 Military Intelligence .

Armed Forces Day, Fly the Flag and Reserves Day, provide a wonderful opportunity for us all to acknowledge the dedication and commitment of service men and women, past and present.

This huge event at Himley Hall and Park attracts thousands of visitors, and this year is set to wow even further, thanks to a daring display from the Wings Parachute Display Team.”

People will be able to pick up a free programme at the information tent, which will be located near the main arena.

Black Country Housing Group, one of the area’s leading social businesses, has been confirmed as the main sponsor for this year’s event. The organisation provides affordable housing and specialist services including residential care to local communities across Birmingham and the Black Country.