Dudley Council bosses are waging war on air pollution – a matter very close to home for the borough’s council leader.

Councillor Qadar Zada said it was time to take action after a recent Friends of the Earth report named Halesowen Road - in his ward of Netherton - as having one of the areas with the most polluted air in the UK.

The leader has ordered a root and branch review by officers to identify what can be done to make the air cleaner for residents in Netherton as soon as possible. 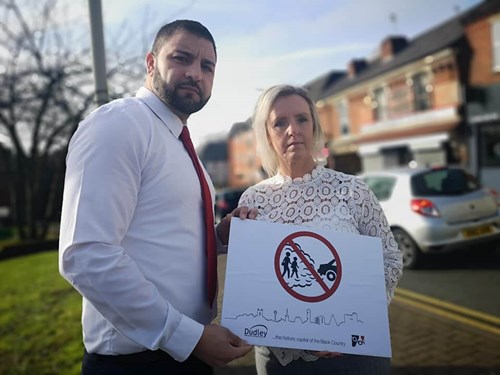 Council leader Qadar Zada with Cllr Cathy Bayton, cabinet member for health, at Halesowen Road where the council has pledged to take action to cut down on air pollution

The levels of air pollution on Halesowen Road are something I have been raising as an issue for more than four years now.

It is particularly close to home for me as a ward councillor and I know it is an issue my residents are worried about.

In the light of the recent report now is the time to take action to reverse this worrying trend. We need to do all we can, for children and future generations, to make Netherton a cleaner and healthier place to live.”

As part of the proposals, the junction of Halesowen Road and Northfield Road will be reviewed to see what can be done to improve traffic flow.

Council bosses will liaise with bus operators around the possibility of relocating bus stops to keep vehicles moving, while buses travelling on the road could also be retro-fitted to make them more environmentally friendly.

Traffic signals, right turns and pedestrian crossing will also be analysed to see the impact they are having on vehicle flow and air pollution.

New signage will also go up and work done with local schools to encourage people to use alternative, low emission transport when travelling into Netherton.

The plans are part of a wider bid by council bosses to cut down on air pollution across the borough.

The local authority has just bought four mobile air sensors which can be used as part of an education programme in schools on how to reduce air pollution. Pupils will be able to measure the level of pollution in the air around their schools, and compare that level to days in which their parents have agreed not to drive them to school.

Dudley Council is committed to improving the quality of the air that we all breathe in the borough, and especially in areas such as schools where there are large concentrations of children.

We are therefore launching this project to help children, teachers and parents understand how they can contribute to improving air quality in the vicinity of the borough’s schools.

Dudley Council can’t improve the air quality without the help and support of everyone who lives and works in our borough.

Each and every one of us has a responsibility to do our best to reduce car use, turn engines off while stationary, ride a bike or walk where possible and utilise public transport – especially looking forward to the improvements in buses and the tram network in the future.

The issue is not simply about pollution in the air, it’s about the health and wellbeing of our community, especially the children.”