Duke of Edinburgh volunteers got the civic seal of approval from the Mayor of Dudley after clocking up a combined 390 years’ service.

The Mayor of Dudley Councillor David Stanley presented Duke of Edinburgh awards to borough recipients at a recent event. 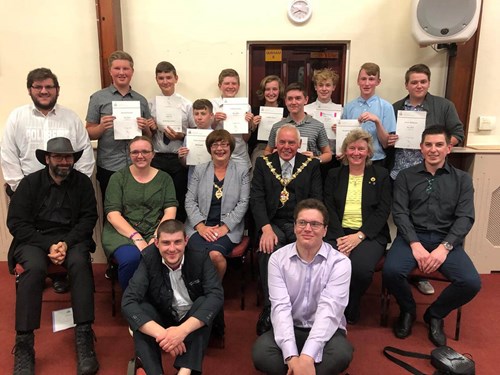 It included long term service awards to 24 volunteers who have devoted their time to the organisation ranging from 40 years to five years of service across the borough.

The Mayor, along with consort Councillor Anne Millward, also presented gold, silver and bronze awards for volunteering, physical, skill, expedition and residential work, at the event hosted by the Dudley Duke of Edinburgh Award Association on September 10.

It was an absolute privilege and an honour to present some of these awards to truly inspiring people.

The Duke of Edinburgh awards have brought out the best in young people for many years and a lot of that success is down to the volunteers.

It was a real pleasure to meet so many of them on the night and talk about some of the work they do, something we should all look to support wherever possible.”

Well done to all of the young people who have achieved success in the Bronze, Silver and Gold Awards. May this lead to many more adventures in the future.

A massive thank you to all volunteers who have given their time to enable young people in Dudley to access the Duke of Edinburgh Award. Congratulations to the volunteers who received long service awards.

Thank you to the Mayor, Councillor David Stanley and Councillor Anne Millward for joining us for the evening to celebrate the great achievements.”

The top three longest servers receiving awards were Mike Abrahams, from the Scout Association and Dudley Association for clocking up 40 years, as well as Stuart Bedworth, from Summerhil Open Unit for his 34 years’ service. Monica Fletcher, from Merry Hill open award was also presented with an award for her 30 years’ service.

Pictured: Councillor David Stanley, Mayor of Dudley, with the recipients of the Duke of Edinburgh long term service awards.