Battle of Britain heroes to be honoured this weekend

Heroes from the Battle of Britain will be remembered in Dudley this weekend.

Serving RAF personnel, veterans and cadets will lead a parade through the town centre on Sunday morning to commemorate the efforts of those who risked all in the skies above Britain during the Second World War. 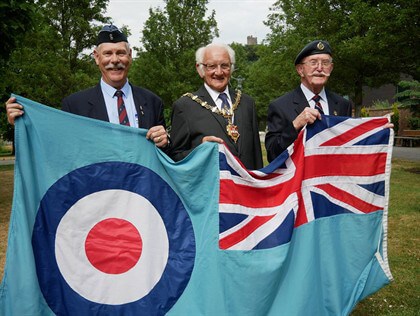 The morning’s events will start with a special ceremony on the steps of Dudley Council House at 10.30am, where RAF Cosford will officially receive the Freedom of Dudley Borough.

From there a parade will march through the town to St Thomas and St Luke’s Church (Top Church) for a special service paying tribute to the heroes who defended the nation stoutly against the German Luftwaffe.

The parade will then return through the town centre before finishing at the cenotaph in Coronation Gardens, where wreaths will be laid.

We are proud of our strong links with the armed forces and are honoured that RAF Cosford will be accepting the honour of Freedom of the Borough of Dudley.

This year, being the centenary of the formation of the Royal Air Force, makes the occasion especially poignant as we remember and celebrate all those who have helped shape the service over the last 100 years.

Events like this remind us all of the huge sacrifice they make and I hope people will come along on the day to show their support.

The event has been organised in partnership between Dudley Council and Dudley Royal Air Forces Association (RAFA).

At 11am the parade will make its way through the town centre to the church.  Setting off from Priory Road, the parade will continue along Priory Street, Stone Street and High Street.

Residents are invited to attend the service at St Thomas and St Luke’s Church at 11.30am. This will be followed by a parade past the Council House in Priory Road, where the Mayor, Group Captain Tone Baker from RAF Cosford and representatives from RAFA will receive a salute.

The parade will end at the cenotaph in Ednam Road where a short service will take place including a period of silence and laying of wreaths.