The first stage of a bid for nearly £1.5 million of lottery funding has been submitted to restore a green space and landmark tower in the borough to its former glory.

Dudley Council is seeking £1.43 million from the Heritage Lottery Fund (HLF) for the ambitious project to breathe new life into the Sedgley Beacon with it’s  Grade II-listed Tower. 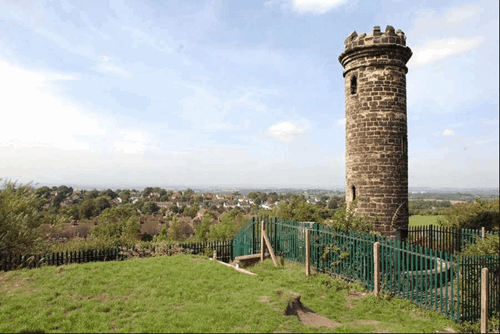 A beacon is believed to have been burnt from the top of the open space as far back as the seventeenth century, and in its heyday it offered some of the most spectacular views in the Black Country from its peak.

Over the years the green space and the 50ft high tower have deteriorated. It is no longer possible to climb to the top, due to anti-social behaviour in the area. The bottom eight feet of its internal stone staircase is missing and it has been fenced off due to crumbling brickwork. Rubble and rubbish is strewn around its base.

The council, working with the Wildlife Trust for Birmingham and the Black Country, submitted a bid in August to embark on a “development phase” for the project. It is hoped a decision on that will be made in January.

The second stage, if the first is successful, will see a further bid to the HLF in February 2020. The total cost of the project is estimated to be around £1.7 million, with the council seeking approximately £1.4m from HLF and match funding for the rest.

As a council we are committed to preserving and protecting the historic assets in our borough.

People used to say you could see as far as Bristol on a clear day from the top of the Beacon, and it would be a real attraction for the community if we could get it back to how it was.

Hopefully we will be successful with the lottery bid, and we can get cracking.

The bid will be discussed at the next meeting of the council’s ruling cabinet, which takes place on Thursday October 25 at the Council House in Priory Road. Members of the public are welcome to attend.