Blue plaque for Hingley’s of Netherton

A historic blue plaque to remember the Hingley family, world famous for their work creating the anchor for the iconic Titanic has been unveiled this week.

The plaque was unveiled on the gatepost of the former Hatherton Lodge, all that remains of the former home of the local industrial and political dynasty. The buildings and land on Drews Holloway, Cradley had been standing derelict and in disrepair and have recently been used to develop seven four-bedroom houses, with the site owner, Mr Field retaining the gatepost and sponsoring the blue plaque to mark the significance of the site.

Hatherton Lodge was the home of the Hingley family from 1861, local ironmasters and politicians.

Noah Hingley (1796-1877) and later his son Benjamin Hingley (1830-1905) resided there, and founded the Hingleys works in Netherton, where the Titanic deck anchor was famously assembled, in 1910.

Hingleys made the shackle, pins and chain, whilst the shaft was made at the Walter Somers forge in Halesowen, and the side arms in Newcastle. The anchor was the largest in the world at the time, 18ft 6 inches long and weighing over 15 tons.

A replica of the deck anchor can be seen in Netherton when it was donated by Channel 4 as part of a documentary series and public celebration. 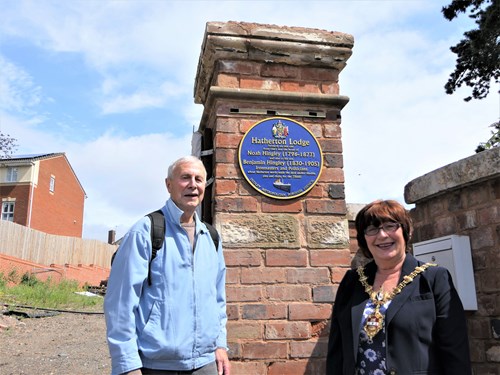 The replica anchor continues to be an eye-catching reminder of the work of the chain making and iron industry in Netherton in the late 1800s onwards. But being able to place this plaque on the site of the Hingley family home helps us to remember them as the remarkable individuals they were -groundbreaking in terms of industry and scale of work, but also their political and social works.

We’re really grateful to Mr Field for retaining the pillar and funding the plaque so that visitors to the site can be reminded of its importance.

Noah the father was a philanthropist supporting education, religion and poor relief, including setting up the Cradley ragged schools.

The plaque was unveiled at 11am on June 11th by the Mayor of Dudley, officers from Dudley Council, Dudley borough artist Steve Field and developer Lol Field, from the Field of Dreams Children’s Home in the Phillipines.