Six parks and nature reserves in the Dudley borough have proved they are a cut above the rest by obtaining Green Flag status. 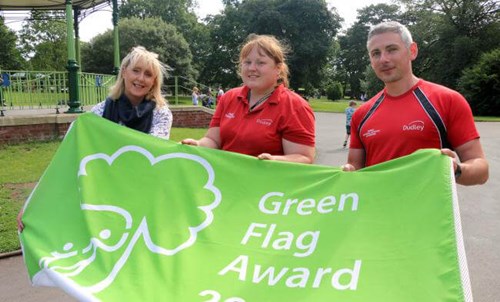 The international award, handed out by environmental charity Keep Britain Tidy, recognises and rewards the best parks and green spaces across the country.

A Green Flag flying overhead is a sign to visitors that the space boasts the highest possible standards, is beautifully maintained and has excellent facilities.

Priory Park and Mary Stevens Park have also received the much coveted additional Green Heritage Site Accreditation for the management of historic features at the two beauty spots.

Meanwhile Abbey Road Allotments in Halesowen was the recipient of a Green Flag Community Award. It recognises quality sites managed by voluntary and community groups.

We are absolutely delighted that six of our parks have received a Green Flag Award, along with the deserved recognition for the brilliant volunteers down at Abbey Road Allotments.

We are particularly excited about the Green Heritage awards, which recognise the drive to preserve and celebrate our unique history.

The beauty spots are among a record-breaking 1,970 UK parks this year receiving the prestigious Green Flag Award, recognised as the mark of a quality park or green space.

It’s fantastic that we have more Green Flag Awards in the UK than ever before.

Each flag honours the thousands of staff and volunteers who work tirelessly to maintain the high standards demanded by the Green Flag Award.

We congratulate each and every winner on their fantastic achievement.

Any green space that is accessible to the public is eligible to enter for a Green Flag Award. Awards are given on an annual basis and winners must apply each year to renew their Green Flag Award status. A Green Flag Community Award recognises quality sites managed by voluntary and community groups. Green Heritage Site accreditation is judged on the treatment of the site’s historic features and the standard of conservation.