Unsung heroes from the world of sport, business, environment, arts, community and education were celebrated at a charity ball tonight (Fri) with the Mayor of Dudley.

“Lady Gornal” - Councillor Anne Millward - hosted the Mayor’s Ball and Civic Awards 2022, which this year had a Peaky Blinders theme, in front of more than 200 people at the Copthorne Hotel in Brierley Hill. 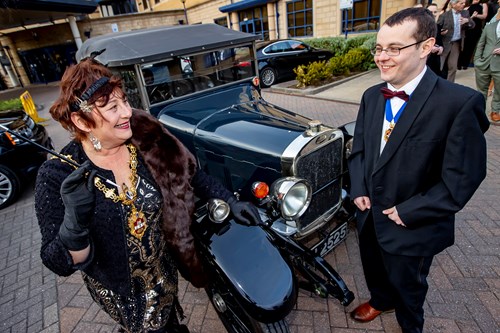 But it was also an opportunity to celebrate the winners of the annual Mayor’s civic awards, split into seven categories and all sponsored by local companies.

The winner of the William Shenstone award for environment, sponsored by Aebi Schmidt, went to Gary Farmer – a Lye businessman who has spent hours of his own time, often at night, keeping the town tidy.

Julia Marks took the runner-up award for her excellent work as chair of the Friends of Wollescote Park group.

Pamela Stevenson won the Thomas Attwood Award for Education, sponsored by SF Harrison Roofing. She was recognised as a champion of special schools and pupils with special educational needs through several years of service both as a governor and a teacher. Priory Park Community School was named as runner-up.

The Duncan Edwards Award for Sport, sponsored by Excel 2000 Windows, went to the team behind Dudley Park Run, a free 5k exercise session put on in the borough every Saturday morning in Brierley Hill. Athletics coach Andrew Bentley was named as runner-up.

Halesowen BID, who have been credited with transforming Halesowen and bringing a feel-good atmosphere back to the town, were the winners of the Mike Holder Award for Business, sponsored by Sharp. Colley Gate pub landlord John Hill took the runner-up prize.

The trophy for the winner of Cedric Hardwicke Award for Arts, sponsored by Copthorne Hotel Dudley, went to community station Black Country Radio for its work in promoting the region and playing a leading role in local town centre events.

Canalboat artist Kerri Williams walked away with the runner-up prize.

Dakota May-Johnson was the winner of the of the Frank Foley Award for Community Spirit, sponsored by Merry Hill Shopping Centre. She is one of the youngest unit managers in the region for St John Ambulance and has almost doubled the numbers in her unit helping to save lives.

The final award was the Mayor’s Pride of Dudley award which was decided by a public vote between two nominees put forward by the borough’s first citizen. In a close-run poll the award went to Dudley Friendship Group. It aims to encourage friendship and combat loneliness in older people. The club, which is run by a group of volunteers, is now in its 13th year.

The runner-up award went to the Friends of All Saints Graveyard. They are a group of local volunteers who regularly work in the graveyard at All Saints Church in Sedgley, clearing vegetation and cleaning the thousands of graves that have been hidden for years.

“The Mayor’s Ball and Civic Awards is a fantastic opportunity to celebrate the unsung heroes of our borough. The folk doing tireless work, often for little financial reward, to improve the lives of people around them.

“It was my absolute pleasure to be able to shine a light on their work, and I was really pleased to meet them on the night and find out more about what they do.

“I would also like to thank everyone who came tonight and dug deep to take part in games and raffles to help raise money for my charities. They rely heavily on public donations and I am really proud to have been able to use my time as Mayor to champion their work.”