Beers from three local breweries will be on sale behind the bar this weekend for a show at Dudley Town Hall.

The move is part of Dudley Council’s pledge to “buy local” and support small businesses when it comes to procuring services and suppliers.

If the beers prove popular, their sale – as well as other local drinks and snacks - may be extended to other events at the St James’s Road venue.

Enville Brewery’s Enville Ale will be available on draught, while there will be bottled ales on sale made by Lye-based Beat Brewery and Fixed Wheel Brewery in Blackheath. 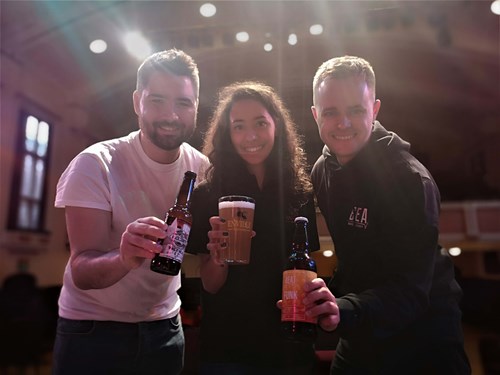 Steve Edwards, whose Propa Black Country Pale Ale has been produced in conjunction with Blackheath-based Fixed Wheel Brewery; Becky Braham, sales co-ordinator for Enville Brewery; and Andy Sinton of Lye-based Beat Brewery showcase some of the drinks on offer at the town hall this Saturday

As a council we have been very vocal about our desire to keep the cash we spend with suppliers in the local area where possible.

We have some fantastic breweries in the borough and the Black Country making amazing ales.

It’s great to be able to give an opportunity for three of those to showcase their beers at the town hall for what will be a well-attended event on Saturday.

If they sell well, which I’m sure they will, we can look at putting them on – and maybe others as well - for future shows.

The move to stock the local beers comes after it was revealed last month the council had awarded Willenhall-based Adesso the contract to supply the authority’s catering uniforms for the next three years.