The leader of Dudley Council today hailed a “bright new future” for Brierley Hill as he met business leaders in the town.

Councillor Patrick Harley met with Ellandi, the new owners of Merry Hill along with council regeneration officers and community leaders, for a walkabout.

The top politician got to speak to bosses about their plans for the massive leisure and retail complex and promised support from the council.

They also looked at potential links from the High Street to Merry Hill. 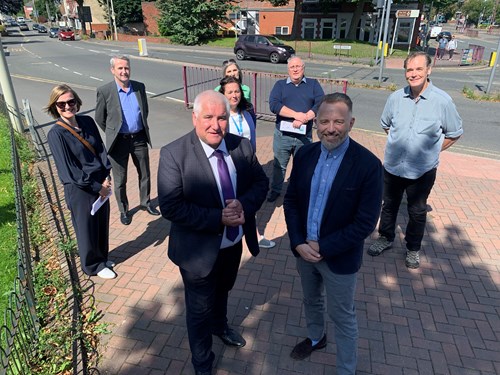 Councillor Harley also highlighted the £10million Future High Streets grants from the government as a catalyst for regeneration in the town, which was announced earlier this year.

The leader was joined by key officers from the council along with business bosses and community leaders in Brierley Hill to talk about plans for the area and how they could work together to improve things.

We are delighted to welcome Ellandi to the borough, one of many good new stories that signal a bright new future for Brierley Hill.

Like many retail sites, Merry Hill has been hit hard by the pandemic, but we will do all we can as a local authority to support

Add to that the millions of pounds pouring in as part of the Future High Streets Fund and the future looks very positive for Brierley Hill.

Earlier this year, Ellandi announced plans for £50million to be spent on Merry Hill. It includes new shops, restaurants and family entertainment.

At the start of the year, the government announced almost £10million would be heading to Brierley Hill as part of the Future High Streets Fund.

The bid, which was headed up by Dudley Council, was one of just 15 in the country to be approved in full.

Key to the transformation will be works to the High Street to improve connectivity and integration with the new Metro terminus linking Brierley Hill to Wednesbury.

In 2020 the government agreed £1.8m from its Heritage Action Zone programme to help regenerate historic buildings and engage local communities through art and cultural projects.

There are a lot of exciting opportunities in Brierley Hill and I am really encouraged by the vision and the enthusiasm of the council and the community.

We have to look at every opportunity we can to work together and bring about improvements to the whole of Brierley Hill.

Representatives from the group highlighted successful schemes such as the events planned at the indoor market and the volunteers watering plants made possible through Brierley Hill in Bloom.

Brierley Hill High Street faces significant challenges. Community run activities such as Brierley Hill in Bloom, litter picks and Heritage Open Days demonstrate the passion and commitment of local residents and stakeholders to the town. There is now an opportunity to work with the local authority and other partners to see some real improvements.

Pictured: Councillor Patrick Harley, leader of the council with Mark Robinson, founder of Ellandi and chairman of the government’s High Street taskforce, leading the touring party in Brierley Hill.