Businessman Roy Richardson to get the freedom of Dudley

Black Country businessman and multi-millionaire Roy Richardson is to be officially presented with the freedom of Dudley borough tomorrow. 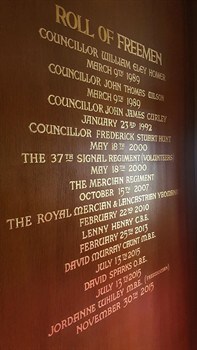 Dr Richardson is a familiar face in the business world and is perhaps best known, along with his late twin brother Don, for developing the Merry Hill shopping centre.

Roy is also a member of the Dudley borough business champions group, which helps forge closer links with both Dudley Council and the business community to help boost the economy.

The 88-year-old will be presented with the freedom scroll by the Mayor of Dudley, Councillor Alan Taylor, at a special dinner at Dudley Town Hall on Wednesday night.

The freedom of Dudley borough is a huge honour and is steeped in history, and I will be delighted to officially present the freedom scroll as one of my first official civic duties as mayor. “Roy Richardson has achieved spectacular success throughout his lifetime. Despite becoming a recognised face and name across the business world, he has always stayed close and true to his Dudley roots. He has been a champion for the borough, and the wider Black Country, across the globe. I’m delighted we can highlight the work Roy has done, and the many achievements he has made, in this way. He will join a long list of big names to receive the honour, including most recently world tennis star Jordanne Whiley and comedian Lenny Henry.

The move to bestow Dr Richardson with the honour was approved by Dudley councillors at a meeting of the full council in December last year.

Twin brothers Roy and Don Richardson were born on April 25, 1930, in Dudley, just half a mile from their iconic Merry Hill development.

They both joined their father’s business in Oldbury at the age of 14 and enjoyed a stellar career in the business world, interrupted only by two years of national service for both in the Transport Division of the Royal Air Force.