The sponsor of this year’s Armed Forces Day is calling on local veterans to come forward to be presented with their special medals and badges at the event. 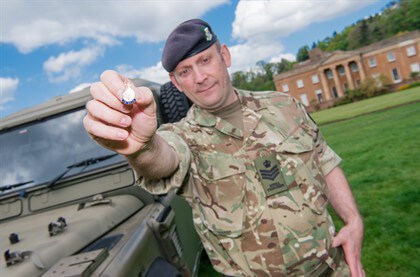 This year’s Dudley Council-run event will be held at Himley Hall and Park on Sunday 1 July to celebrate the work of servicemen and women, past and present.

The event will run from 11am to 5pm and will include a presentation of medals and badges including the HM Armed Forces Veterans Badge by the Mayor of Dudley to veterans living in the borough.

Black Country Housing Group, one of the area’s leading social housing providers is this year’s principal sponsor and its chief executive, Amanda Tomlinson, is keen to make sure that as many veterans as possible come forward to receive their honours at this prestigious event.

At Black Country Housing we believe in making a difference to the lives of local people, which is why we’re so keen to celebrate the contribution of local veterans who have done so much for people both at home and abroad.

We are calling on servicemen and women who are entitled to, or have already been sent their HM Armed Forces Badges, to come forward and have them officially presented at Armed Forces Day.

The council’s Armed Forces Day celebrations are growing every year, attracting thousands of visitors to Himley Hall. It’s free-entry and includes entertainment for all generations of the family to enjoy with the formal proceedings and badge presentation being a highlight of the day.

Other highlights of this year’s event include performances by The Bluebird Belles, a vintage vocal harmony trio, and RAF Cosford Voluntary Band, the spectacular Beating Retreat, WWI and WWII themed history talks, a display of historic military vehicles and children’s entertainment including vintage fairground rides and Punch and Judy.

People who think they are entitled to one of the HM Armed Forces Veterans Badges should call the Veterans UK helpline on 0808 1914 218 or email dbs-modmo-vetsbadge@mod.uk to apply, or for medal queries DBS-Medals@mod.uk Veterans need to have applied for and received their badge before contacting Dudley Council in order to have them presented on the day.

Second World War veterans who served on the arctic convoys and in the Bomber Command can also apply for their badge before Armed Forces Day by calling the Veterans UK helpline.

Anyone who has already received one of the badges but has not had it formally presented to them before, can contact Dudley Council on 01384 818186 to be part of the ceremony.

This year’s event will also be supported by Blind Monkey Brewery.

The national Armed Forces Covenant ensures people who have served in the Armed Forces are treated fairly. To find out more go to www.armedforcescovenant.gov.uk

To find out more about Black Country Housing visit http://www.bchg.co.uk/