A thriving family business in Halesowen which has undergone a major expansion plan got the civic seal of approval from the Mayor of Dudley at the official opening of its new premises.

Taylex Displays recently moved to new premises in Amber Way as part of an ongoing growth strategy which has seen staff soar from five to 35 in 11 years. 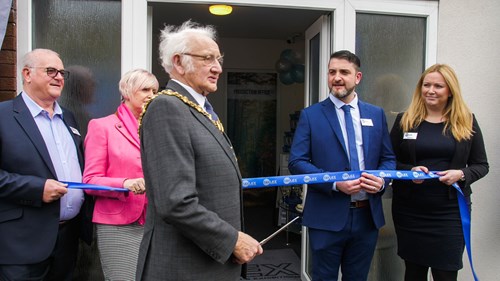 Mayor, Councillor Alan Taylor, officially opened the 30,000 sq ft site which is 10 times larger than the previous base. He had a behind the scenes tour of the business and discussed the firm’s plans to grow and create local jobs with the management team.

It’s a very impressive business and their growth is clear to see having recently moved from a 3,000 sq ft site to the 30,000 sq ft they have now.

“It was fascinating to see how the family has been able to build such a thriving business and we’re very proud to have them in the borough.”

The firm was started in 2008 by Karl and Tony Clark, employing five people. Now the business boasts 35 permanent and contract staff, all recruited locally.

It was a pleasure to show the Mayor of Dudley around our business. We’ve come a long way since we started in 2008 and our expansion plans are really coming to fruition.

We employ many local people and have great links with schools and colleges to promote the importance apprenticeships and encourage young people into this field of work.”