A new piece of artwork commemorating the work of inventor Abraham Darby the First who pioneered the production of pig iron during the Industrial Revolution has been unveiled in his birthplace, Wrens Nest, Woodsetton.

Darby, was born in 1678 in Wrens Nest, Woodsetton, Dudley. Though he had humble beginnings as the son of a yeoman farmer he was related to local aristocracy, his great grandmother was sister to Dud Dudley, the illegitimate son of Edward Sutton, fifth Baron of Dudley.

He was apprenticed in the 1690s to Jonathan Freeth, who shared his Quaker faith, where he learned the use of coke in malting ovens. This led to Darby’s developments in the use of coke rather than the more expensive, traditional charcoal in the production of iron in a blast furnace. He set up a furnace with partners at Coalbrookdale, Shropshire in 1709 to create pots and other cast iron goods, producing commercial grade cast-iron in a cost-effective manner. His innovation in the use of coke smelting contributed to the development of iron and steel manufacture which drove the industrial revolution.

The sculpture has been designed by Dudley Council’s borough artist, Steve Field. It stands 3.9m high and is made, fittingly, of iron and steel. It symbolises a cross section through Abraham Darby’s 1709 Furnace at Coalbrookdale, with the Pig Iron Workers in front of it. It is viewable all the way round, but particularly from the front view, from the pavement, and also from the surrounding roads, located on the corner of Sedgley Road and Birmingham New Road.

The project was commissioned by Woodsetton Charitable Trust, and the Friends of Wrens Nest National Nature Reserve, with £8000 funding from three of Dudley Council’s community forums.

There has been much sponsorship in kind from local industry who have provided the iron and steel components including : Thomas Dudley Foundry Ltd (huge iron ground plaques), Mid Therm Laser and Hadley Group (steel), Barnshaws Section Benders Ltd (bending/rolling), Holdens Brewery Special Darby beer, featuring as it did a drawing of the design on the label by artist Steve Field, which sold out when it was launched with 10% of profits going towards the project. Assembly was by Vince Thompson of Iconoclast Constructs, who still uses traditional rivets. 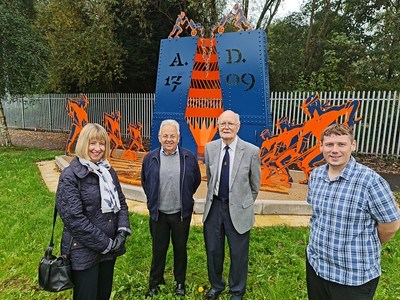 Abraham Darby was a remarkable man. He came from humble beginnings, learning to innovate and have a vision of what could be achieved using local materials. His coke smelted blast furnaces paved the way for the Industrial Revolution. It’s incredible to think that the work of a boy from the Wren’s Nest could still have impact today.

This sculpture which has been commissioned and supported by local community groups, donors and businesses is a striking tribute to this extraordinary man who played such an important role in the development of the Black Country as a key player in the Industrial Revolution. The fact that so many community groups and local businesses came together to help make this project happen shows that collaboration and community spirit continues to flourish in the Black Country.

The Trustees and members of Woodsetton Charitable Trust have been delighted and honoured to be a member of the team, over the last three years, raising funds for the formation of this uniquely amazing work of art.

This memorial was designed and produced by Artist Steve Field to mark the birthplace of Abraham Darby 1st at the Wrens Nest Dudley.

This delightful sculpture, sited on one of the major feeder roads to the motorway network, forms one of the principal-gateways to Dudley Town reminding all who pass daily of the works of this internationally known industrial revolution pioneer for his unique development work in smelting iron.

The Friends of Wrens Nest are delighted to have been involved in this fantastic project. Abraham Darby I – The Father of the Global Industrial revolution was born on the site now occupied by Wrens Nest National Nature Reserve. His memorial is worthy of such an important man who lived in our area and changed our world in such a positive way forever.

This has been a fantastic community project right from the start and we've all been blown away by the help and support that we have received.

In particular, I want to pay tribute to the local businesses that have donated time, money and materials, and without which none of this would have been possible, to organisations such as Woodsetton Charitable Trust and The Friends of Wrens Nest Nature Reserve, not only for their work on this project, but for what they do all year round for our community, to Steve Field, the Dudley Borough Artist, and of course to all the local residents that have shown their support.

I hope that everyone agrees this is a fitting tribute to the father of the Industrial Revolution and something which will act as a lasting reminder of the contribution that local people and our area has made to our region and our country as a whole, something we must always remember.

The sculpture was made as a kit off site and was assembled on site.

The monument forms a new Geosite as part of the Black Country Geopark.

More on the geosites

More on the trust