Dudley Council has announced plans to invest more than £13million to radically overhaul two of the borough’s sheltered housing schemes, Jack Newell Court and Woodhouse Court, to bring them up to modern day living standards.

The council has now appointed EQUANS, the new brand for global energy company ENGIE, as the main contractor to carry out the works. Preparatory work has been ongoing until now.

EQUANS, one of the UK’s leading providers of regeneration services, will bring a wealth of expertise to the project with its proven track record in refurbishment. It will work with the council to redevelop the apartments to provide increased floor space to meet national space standards and improve accessibility.

They will also reconfigure internal spaces to create 12 new homes across the two schemes, with another six apartments at Woodhouse Court and six at Jack Newell Court, providing much needed new housing for older people in the borough.

The internal layout of all the flats will be improved and some flats will have balconies installed to some external areas of the building. The communal kitchens will be enlarged, the communal lounge redesigned, and a wellbeing room included.

Work will continue through 2022 with residents expected to move in early 2023. 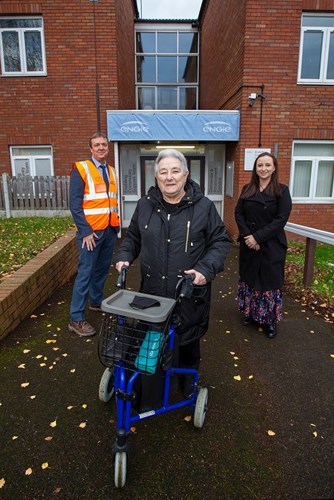 This is an exciting step forward in this project and I’m pleased we now have a contractor on board.

This is part of our ongoing programme to provide better sheltered housing accommodation for our tenants, building on our successes in nearby schemes and I look forward to seeing the work get underway.

Thank you to the tenants who have moved out temporarily while these works are being carried out. When they return, they will certainly reap the benefits this project brings.

We are extremely pleased to have been chosen to carry on our successful relationship with Dudley Council, which has seen us transform thousands of homes across the borough over the last seven years.

This improvement work will help to create a greater sense of independence and privacy for residents of these housing schemes, and provide a safe, warm and modern place to call home.

The two properties were built in the mid-1980s and currently provide supported housing in a total of 79 one-bedroom flats and communal living areas for people aged 55 or over.

An affordable housing grant of £4.8m has been secured for the remodelling of Woodhouse Court and Jack Newell Court from Homes England, which together with almost £9m of council investment will provide modern, remodelled schemes.

For the work to go ahead as quickly and safely as possible, the council has worked closely with the tenants living in both schemes who have temporarily moved out of their properties. The council is fully supporting tenants in this process.

This development is part of the council’s overhaul of sheltered housing schemes across the borough.