The Armed Forces Flag has been raised from the top of the landmark building in Priory Road today (June 21). It will stay in place for the week leading up to Armed Forces Day.

The Mayor, Councillor Anne Millward, led a “Fly the Flag” civic ceremony at 11am in Coronation Gardens, Dudley, which concluded with the raising of the flag. 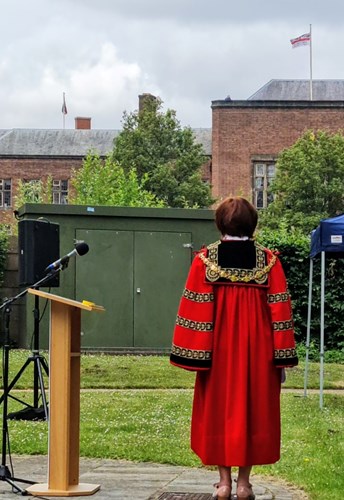 It comes as military-themed films will be aired on a big screen in the grounds of Himley Hall and Park on Sunday (June 27) to mark national Armed Forces Day.

The films will be shown as part of a bumper four-day drive-in cinema event organised by Dudley Council in association with K2 Security, starting on Thursday.

And a veterans badge presentation, which usually takes place at the big Armed Forces Day event at Himley, will take place on a smaller scale due to coronavirus restrictions at Reserves Day on Wednesday. (June 23)

Flying the Flag symbolises our commitment to supporting the national celebration and is a symbol of our thanks to all those who have and those who currently serve in our armed forces.

This is the second year running we haven’t been able to hold our normal Armed Forces Day celebrations.

I am pleased we will still be holding a veterans badge presentation, albeit on a smaller scale out of necessity due to the current restrictions. Furthermore, our military themed films are a nod to the event we would normally hold to commemorate our armed forces and celebrate the efforts of all those serving past and present.

Although it’s a great shame that we can’t hold our normal event I hope people can come along and enjoy the films.

The military films will be shown on Sunday to coincide with what would have been the borough’s traditional Armed Forces Day celebrations in the park.

The Stephen Spielberg-directed War Horse will be shown at 1pm followed by the classic The Great Escape starting at 5pm.