The Armed Forces Flag has been raised from the top of the landmark building in Priory Road today (June 24). It will stay in place for the week leading up to Armed Forces Day. 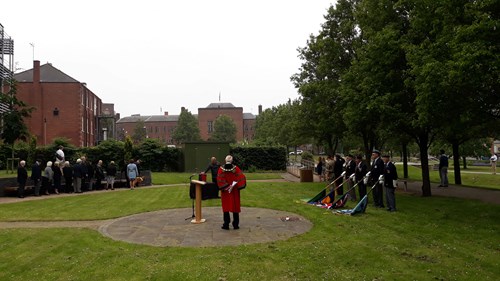 The Mayor, Councillor David Stanley, led a “Fly the Flag” civic ceremony at 11am in Coronation Gardens, Dudley, which concluded with the raising of the flag. It marks the start of the run-up to the council’s huge day of celebration on Sunday 30 June at Himley Hall and Park.

Flying the Flag symbolises our commitment to supporting the national celebration as we make the final preparations for Sunday’s Armed Forces Day Event, which thanks all those who have and those who currently serve in our armed forces.

Armed Forces Day, run in association with Black Country Radio, will celebrate the work of service men and women past and present on Sunday from 11am to 5pm.

The free event will provide entertainment for all the family including vintage fairground rides, Punch and Judy shows and craft, food and vintage stalls. A large display of historic military vehicles will return to the grounds and an original WW2 Dakota will fly past at 1.20pm (weather permitting).

Pete’s War Time Show and Victory Gal Melissa will keep the crowds entertained in the park with classic war time era songs and stories. There will also be paint balling provided by Dudley Army Cadet Force and an archery range, provided by Kingswinford Air Cadet Squadron.