Council flying the flag to support our armed forces

The Armed Forces Flag has been raised from the top of the landmark building in Priory Road today (June 25). It will stay in place for the week leading up to Armed Forces Day.

The Mayor, Councillor Alan Taylor, led a “Fly The Flag” civic ceremony at 11am in Coronation Gardens, Dudley, which concluded with the raising of the flag. It marks the start of the run-up to the council’s huge day of celebration on Sunday July 1 at Himley Hall and Park.

Flying the flag symbolises our commitment to support the national celebration as we count down the final days to the weekend’s event, one of the largest of its kind taking place across the region.”

The annual Armed Forces Day, which attracts thousands to Himley Hall and Park, takes place on Sunday from 11am to 5pm. The free event is being held in association with Black Country Housing Group and promises to be bigger and better than ever before. 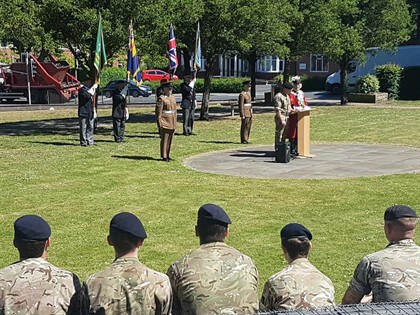 Topping the bill will be a parachute display by the Wings Parachute Display Team at around 12.30pm (depending on the weather) with seven parachutists set to dive from their plane over Himley Park, landing in the main arena.

The formal element of the day, the HM Armed Forces Veterans Badge presentation to veterans, will be held later in the afternoon. The Bluebird Belles, a vintage vocal harmony trio, and RAF Cosford Voluntary Band will perform on the day and there will be a display of current and historic military vehicles.

During the event there will also be entertainment throughout the park for all ages.  Activities include Punch & Judy shows, storytelling sessions and vintage rides.