Dudley Council has marked International Day Against Homophobia, Biphobia and Transphobia (IDAHOBIT) with a small event that is now available to watch on Youtube.

Invited guests gathered on Coronation Gardens yesterday (May 17) to hear from key speakers and watch the rainbow flag raised on the Council House and Dudley Castle, to help increase awareness of the persecution suffered by LGBTQ people all around the world.

People can watch the entire event on Youtube, complete with performances by Trixie, who compered the event, a contribution from West End Star, Kieran Brown singing ‘Come on in from the Outside’ from Taboo and two poems read by Dudley Youth Council members. 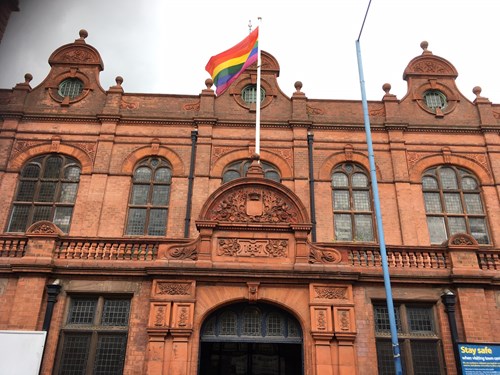 The IDAHOBIT flag was also flown above Stourbridge Town Hall

Dudley Council is committed to eliminating discrimination, harassment and victimisation and promoting good relationships between people from diverse backgrounds within the rich and varied communities which make up our borough.

I was thrilled to host Dudley’s first ever event to mark this special day on 17 May in 2019, sadly and for obvious reasons we were unable to meet together last year but I am delighted that (albeit in much smaller numbers due to COVID restrictions) we have been able to recognise this important day.”

The video of the event is available on YouTube.