Thousands of new jobs and homes could be created under Dudley Council’s proposals to cut red tape and speed up development.

Proposals to make it easier for the council to attract investors, developers, businesses and jobs across Dudley are expected to get the green light at cabinet next week. 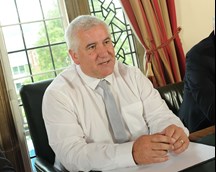 Under the proposals powers will be extended to senior council officers to enable them to secure funding for new investment and development, acquire and dispose of land and invest in public realm and infrastructure.

These powers will be applied in a 2km corridor on either side of the Metro line as it makes its way through Dudley to the DY5 Enterprise Zone and Brierley Hill.

An Economic Impact Assessment of the benefits of the Metro extension predicted the creation of 34,000 new jobs over 20 years and an increase in housing delivery to 2,000 homes per year. These new powers will be used to deliver these ambitions.

As well as the Metro corridors, these powers will also apply to the area action plans for Stourbridge and Halesowen and key transport corridors across the borough.

More than £200m of investment is already expected in the Dudley Town Centre area.

The announcement ties in with Dudley Council’s pledge to always utilise brownfield and urban land first in order to accommodate the development of new homes and businesses.

“Once again we are looking we are cutting red tape by finding pragmatic and efficient ways to work with partners and investors in order to build great things for Dudley borough.

“Dudley is open for business and by extending the powers to our officers to attract new investment we can deliver new facilities, shops, homes and jobs for our residents.

”Dudley Council passionately supports the development of the brownfield land along these corridors and the more of this that can be brought into use, the more we will be able to protect our greenbelt from development.”