Cracking down on crime number one priority for People's Panel

Safer streets and less fear of crime are critical for the future success of Dudley and Brierley Hill town centres, a new people’s panel has concluded.

A group of 40 people from the two towns were selected to form the first ever Dudley People’s Panel. 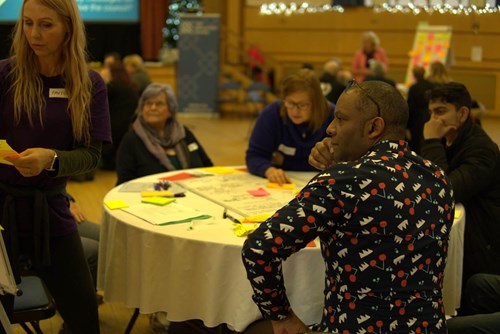 The panel was independently designed and facilitated with the support of The Democratic Society. It met to discuss what communities and the council could do to make Dudley and Brierley Hill town centres vibrant, welcoming and places residents could be proud of.

Cracking down on crime featured prominently on both lists – and council bosses said today measures were already being put in place to help people feel safer in town centres. They include investment in CCTV cameras and new Police Community Support Officers (PCSOs), while a plan is also in the pipeline for a new police station in Dudley town centre.

The panel discussed the issues and heard evidence from experts on a range of subjects relevant to the future of Dudley and Brierley Hill’s future development including town centre regeneration, community safety, public health and leisure over two weekends in November and December. People’s Panel members spent time coming up with detailed recommendations to present to councillors.

In Dudley, the three ‘key success proposals’ with the most support were:

In Brierley Hill, the three ‘key success proposals’ with the most support were:

A full report of the People’s Panel findings will go before Dudley Council’s ruling cabinet for consideration at a meeting on February 12 at the Council House. It will also be discussed at Dudley Council’s Place Scrutiny Committee on January 29.

We wanted to run the People’s Panel in order to give members of the public more say over decisions that affect them and their communities.

As part of this, the council was thrilled to be one of only three local authorities selected by the government to take part in the Innovation in Democracy Programme.

It has not come as any great surprise to us that fear of crime is high up on people’s priorities. It is one of our key priorities as well, reflected in the fact we are spending nearly £2 million on boosting CCTV coverage in the borough and £750,000 on new PCSOs. We are also in talks with the police about utilising land we own in Dudley town centre to build a new police station.

As a council we will use the information provided by the People’s Panel to help us decide what further we can do in the short, medium and long-term to make the borough’s town centres vibrant and welcoming.

The People’s Panel was a citizens’ assembly run by independent facilitators from The Democratic Society.

The people of Dudley borough are extremely passionate about the future of their town centres. This process, independently facilitated by The Democratic Society, has enabled a group of 40 randomly selected residents to craft a blue print for the future of Dudley and Brierley Hill town centres.

By considering evidence and working with each other to weigh up options and consider trade-offs they have developed a set of meaningful, actionable recommendations.

It will be exciting to see how the recommendations made by the People’s Panel are valued by elected members to aid their decisions to make town centres places which are vibrant, welcoming and somewhere residents are proud of.

The Dudley People’s Panel has shown the power of residents being involved in local authority decision making. Engaging with residents in a genuine and meaningful way is a powerful and worthwhile process.

In October, letters were sent to 10,000 randomly selected households, inviting people aged 16 and over to register their interest in becoming a People’s Panel member.

Households which received the invitation were able to register their interest in participating. The Sortition Foundation then randomly selected 50 individuals from the pool of responses who broadly represented a cross-section of Dudley’s demographic profile in terms of age, gender, geography, household type, occupation, disability and ethnicity.

Panel members were given £150 via BACS transfer at the end of each weekend - £300 in total – to incentivise, retain and recognise their commitment and thank them for their involvement.