Knowing the warning signs of grooming and child sexual exploitation (CSE) is the focus of the latest phase of a regional awareness campaign launched today (September 17).

The see me, hear me campaign is encouraging adults and young people to make themselves aware of how grooming can develop and the key warning signs to help safeguard youngsters from this hidden crime.
The hard-hitting short animation focuses on an abuser describing how he grooms a girl with gifts, alcohol and affection before exploiting her. He ends saying ‘the warning signs were there.’ 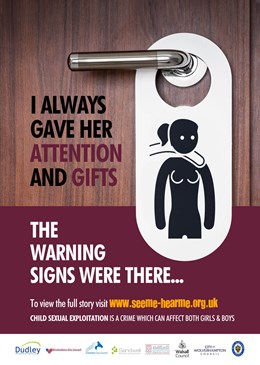 The 30-second clip will target young people directly via Instagram, Facebook, Snapchat and twitter as well as through popular gaming, entertainment and mobile messaging apps they use. An advert will also go out via Spotify.

Parents will be reached via Facebook and other apps they use, while posters will also appear on buses across the region and at Metro stations.

This latest phase of the campaign highlights some of the warning signs, which may indicate a young person is at risk. We all have our part to play in keeping our children and young people safe so it’s so important everyone makes themselves aware of this horrific crime. Visit the campaign website to find out more. It contains a wealth of information about CSE and the warning signs to look out for, as well as signposting people to help and support.

While more and more people are becoming aware of this hidden crime, it’s vital we don’t become complacent and we continue to provide people with information to help them recognise concerns and take action. CSE can affect both girls and boys. Being aware of the warning signs is one of our most effective weapons in tackling child sexual exploitation and acting on concerns early can help prevent abuse happening or escalating. I would urge people to check out our website www.seeme-hearme.org.uk to find out more.

see me, hear me

Anyone who is concerned about the safety of a young person should call West Midlands Police on 101, speak in confidence to Crimestoppers on 0800 555111 or in an emergency call 999. Childline also have counsellors available online at www.childline.org.uk Find out more about child sexual exploitation at www.seeme-hearme.org.uk

In 2017, the campaign received national recognition and a Bronze Award at the Public Sector Excellence awards