The Deputy Mayor of Dudley is backing a show being put on by local artists in the borough to raise cash for Russells Hall Hospital.

Councillor Hilary Bills met up with Billy Spakemon and Tom Stanton, aka The Blue Granits, as they performed in the reception of the hospital for visitors this week. 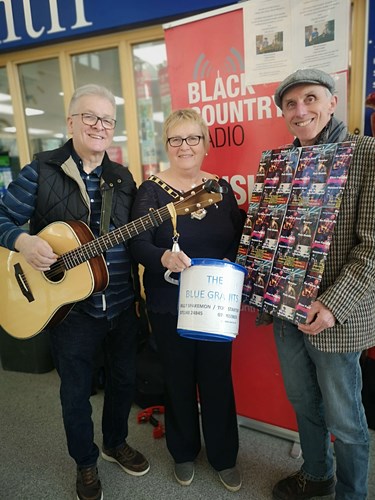 The duo will be performing alongside a number of other local acts at Banger II, a live music show in association with Black Country Radio at Brierley Hill Civic Hall on Friday January 24.

All artists performing are waiving their fees, with the money instead going to the diabetes unit at the hospital. The Civic show has been organised by members of local band Rumour – Pete Brookes, Liz Nicholls and Rob Craner – who will also be performing on the night.

I was delighted to meet Billy and Tom – they organised a similar event last year which went down very well and I’m looking forward to seeing this one.

It’s for an amazing cause and there are some really talented musicians on the bill, so I’d urge people to book tickets and get along to support them.

Tickets for the show cost £10 in advance or £12 on the door. For further information, or to book, go to www.bhillcivic.co.uk