Dudley Council is banishing the blues for green #BlueMondayGreen next Monday, on Blue Monday, January 20, which is widely known as the most miserable day of the year.

Dudley town centre, Dudley Council House and Himley Hall will be lit up in green for Blue Monday, a campaign aimed at driving away the blues, supporting people to talk about their feelings and supporting mental wellbeing.

The third Monday of January, which this year falls on January 20, is known as Blue Monday because of the combination of post-Christmas blues, cold dark nights and the arrival of credit card bills.

Council worker Ben Clews, aged 27, fully backs this campaign and its aim to reduce the shame of mental ill health. He said:

Talking about my depression at work has been critical to my recovery - the symptoms can be quite clear to other people, but affect your ability to see them in yourself.

After discussing it with my colleagues, I could count on them to intervene if my mood started to dip again, when I wouldn't notice myself. This is just one example of why it's important to challenge the stigma around mental health issues. 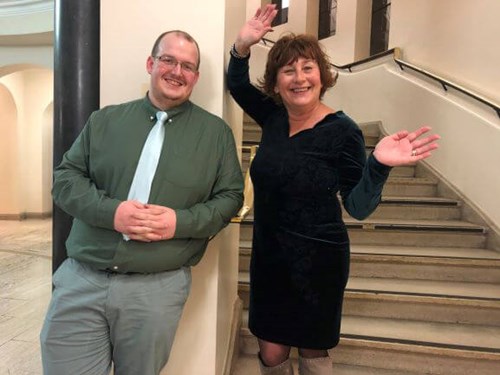 Mayor’s consort, Councillor Anne Millward, is also lending her weight to the campaign. She said:

Everybody struggles with their mood on occasion, but some people experience an uphill battle with their mental health. I have had my own share of tough times in the past, and I urge everyone to be more aware and supportive of those who are going through difficult times right now.

The Blue Monday campaign #BlueMondayGreen was initiated by Barclays and developed in London by the Lord Mayor’s Appeal, before being launched in the West Midlands by the West Midlands Combined Authority in 2019.

For online help and guidance on mental health as well as information on what mental health support is available in the Dudley borough, go to www.lets-get.com/healthy-lifestyles/mental-wellbeing

Let's Get advice and support for mental health