Dudley event promotes equality for all

More than 100 people gathered to view performances, hear readings and see the rainbow flag being raised over Dudley Council House and Dudley Castle. 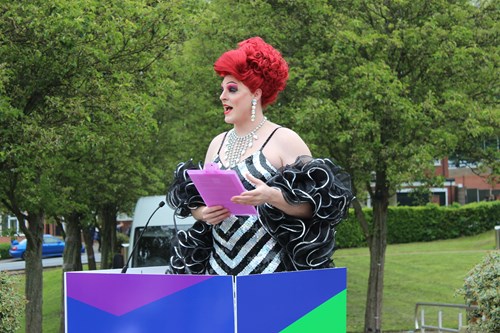 The Mayor of Dudley Councillor David Stanley and other invited guests including Deputy Lieutenant Ninder Johal and Reverend James Treasure spoke at the event and poems were read by Alan Parr and Chief Superintendent Sally Bourner.

It was the borough’s first ever IDAHOTB event, a worldwide celebration of sexual and gender diversities. Hundreds of events in over 120 countries across the world take place to mark this significant day within the LGBTQ+ community.

The rainbow flag will fly over the castle and council house until tomorrow.

Dudley Council is committed to achieving parity for all our residents irrespective of their sexual orientation or gender identity.

We have flown the rainbow flag from the Council House on this day for the past two years and this year we also held this successful event to show our solidarity with the LGBTQ+ community.”

There was a special performance by In Sound Company, an inclusive choir created by Wordsley-born Chris Passey and Richard Skilbeck. The choir has toured the UK with Josh Groban and Russell Watson and has had notable appearances on Songs of Praise.

The theme of this year’s international day is celebrating justice and protection for all.