Dudley borough came together to remember the atrocities of the Holocaust in a commemorative event at Dudley College.

The Mayor of Dudley, Councillor Sue Greenaway, joined local faith leaders to light a candle of remembrance for the millions of people who were killed and persecuted during the Holocaust, before planting a tree in Coronation Gardens to mark the 80th anniversary of the Association of Jewish Refugees.

The highlight of the event was a captivating keynote speech by concentration camp survivor Eva Clarke BEM. Mrs Clarke was born on a cart outside the Mauthausen camp in April 1945 after her pregnant mother was sent on a horrific three-week journey via coal truck. Fifteen members of her family lost their lives in the Holocaust.

Mrs Clarke shared the story of her parents’ banishment by the Nazis from Prague to the Theresienstadt ghetto and eventually to the Auschwitz-Birkenau concentration camp in Poland, where her father was shot dead less than a week before prisoners were freed by the Red Army. She would eventually escape Mauthausen with her mother after its liberation by American forces just days after she was born.

The native oak tree symbolises the contribution of Jewish refugees to life in Britain. Dudley was selected as the final site for planting due to the borough’s long history of welcoming refugees of many different faiths and nationalities. 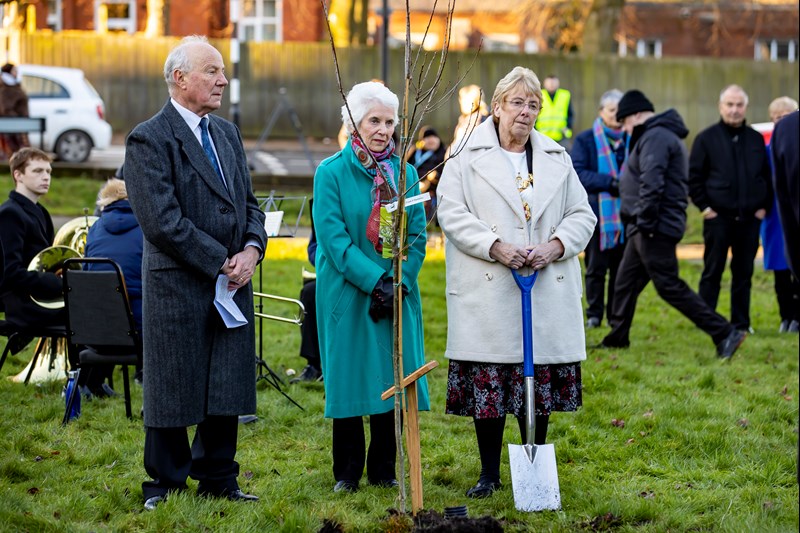 The commemoration was an immensely moving event and I was honoured to light the candle of remembrance and plant the memorial tree.

Listening to Eva and her family’s story was compelling and I am truly grateful to her for attending, as well as our faith leaders from across the borough.

It’s so important to keep the memory of the Holocaust alive and ensure that it is never repeated, particularly as time goes on and its survivors get older.

I was heartened to see so many young people from Dudley at the event and I hope they will carry the message of resisting hatred and intolerance long into the future.

It was the first year since 2019 that the annual commemoration took place in-person, following three years of virtual events due to the coronavirus pandemic. This year’s memorial event was organised by Councillor Keiran Casey.