A plaque has been unveiled in honour of Dudley’s most famous footballing son at the Dell Stadium, with a prestigious tournament to take place there next year in his honour. 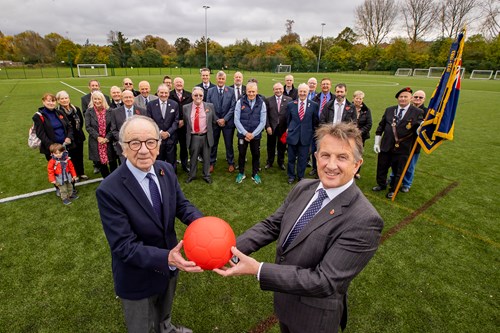 The field is to be twinned with designated play areas at Flanders Peace Field, in Messine, Belgium, the site of the Christmas truces in 1914 during the First World War.

In the week leading up to Christmas 1914, German, British and allied soldiers stopped fighting to sing festive songs. On Christmas Eve and Christmas Day, some ventured into no man’s land to exchange gifts and to play games of football.

The dedication has been organised and funded by the Duncan Edwards Tribute in conjunction with Dudley Council.

The plaque unveiled today says “all games and sports on this Peace Field will be played in the spirit of the Christmas truces. Lest we forget.” 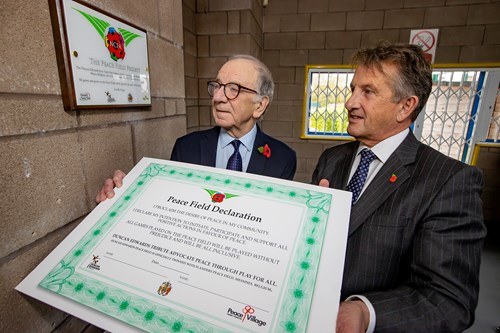 A partnership has also been formed with three other Peace Field projects in the UK in honour of footballing icons – George Best (Belfast), Denis Law (Aberdeen) and Sir Tom Finney (Preston).

Football teams representing each will play in the inaugural Peace Field tournament at the Dell in May next year, where they will compete for the Duncan Edwards Trophy modelled on the statue of the star in Dudley town centre.

The Duncan Edwards Peace Field is a wonderful initiative and a sobering reminder to us all of the sacrifices made for our freedoms, as well as another tribute to Dudley’s most famous footballing son.

We are looking to put Dudley borough firmly on the map with our bid for city status. Hosting prestigious events like next May’s competition for the inaugural Duncan Edwards Trophy can only help us with that bid.

The positive response to our plans for the Duncan Edwards Peace Field project has been quite remarkable.

It will now provide a strong platform to promote the football heritage of Duncan Edwards – and link his birthplace of Dudley with some of the greatest cities in the world.

To find out more about the work of the Duncan Edwards Tribute, go to www.duncanedwardstribute.com