Duncan to get a World Cup Spruce Up

A statue of Dudley’s favourite football hero is to receive a new lease of life just in time for England’s quarter finals match in the World Cup.

The bronze statue of Duncan Edwards, which sits in Dudley town centre, is undergoing a process of re-patination on Friday (6 July). 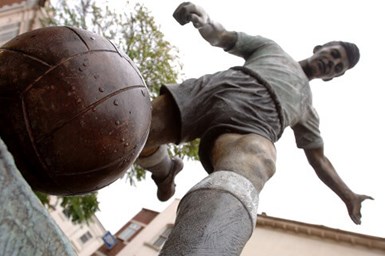 A metalwork specialist will use wax and heat during the work to restore the white of Duncan’s England shirt before scaffolding is removed later in the day, ahead of Saturday’s game against Sweden.

Duncan Edwards, who was born in 1936, played for England on 18 occasions and impressed people from around the world with his talent. He tragically died in the Munich air disaster in 1958.

Duncan is our home-grown hero and we are delighted that this restoration work is being undertaken at such an exciting time for England’s World Cup hopes.

The statue is a focal point in the town and I’m sure this work will bring good luck to our boys over in Russia.

The statue, which was cast in bronze, was created by artist James Butler RA, in 1998.

As football fever grips Dudley borough, Dudley Council is also flying the England flag from the top of the Council House ahead of England games.

Watch the leader of the council talking about the work