An electric-powered bin lorry is doing the rounds across the borough this week as part of a trial.

Dudley Council bosses have introduced the vehicle to its fleet and it has been used on several routes this week. 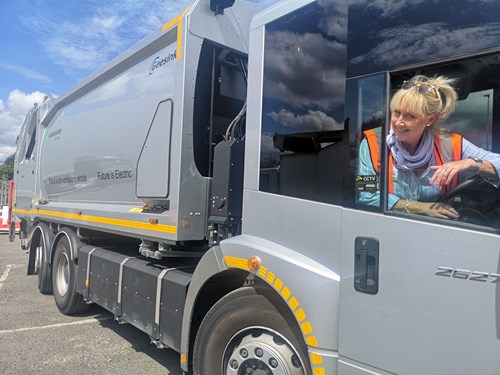 The environmentally-friendly vehicles cost around £400,000 each, compared to approximately £180,000 for a normal bin lorry.

But it is estimated the electric vehicles deliver savings of more than £15,000 a year in fuel and maintenance costs, as well as cutting down on greenhouse gas and nitrous oxide emissions which pollute the atmosphere.

The council is currently working in partnership with the Midlands Energy Hub on a scheme to obtain funding to cover the gap in cost between electric and normal lorries, which would allow the local authority to purchase two of them.

I went out in the new vehicle this week and I was amazed how quiet it was. The vehicles will have a noise emitting device but even then they will be a lot quieter than the normal bin lorries.

Other features include the screen on the side of the vehicle, which will be able to give up to date information. They will be better for the environment and improve working conditions for the operators, and of course be less noisy for our residents.

There is no doubt they are significantly more expensive than normal bin lorries but the environmental advantages of using electric lorries are enormous.

I am massively in favour of their use, and welcome the work of the Midlands Energy Hub in trying to make such vehicles affordable for local councils.