Eton plans are “icing on the cake”

The highly anticipated move to open an Eton college in Dudley will be the “icing on the cake” for the growing investment in education in the borough, senior leaders said today.

The head of the prestigious college met with the leader of Dudley Council this week to discuss the work.
Headteacher Simon Henderson and Councillor Patrick Harley discussed the timetable for the work and the detail behind the proposals. 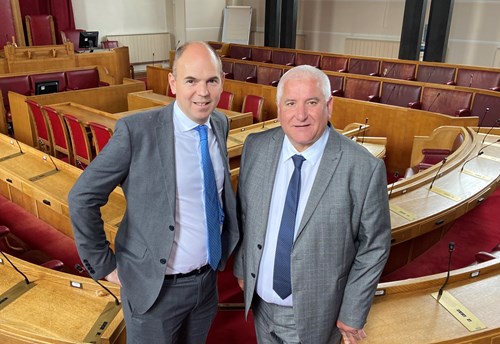 When complete it will see the new college open on a site to be determined in the borough and add to the University Campus which is already taking shape at Castle Hill.

We have so much to celebrate at the moment with the £1billion pound worth of regeneration well underway – Eton is the icing on the cake.

Part of those proposals include a university style campus at Castle Hill and the Eton offer will add to that to make Dudley a number one destination for post 16 education. I am really excited about getting started.

The venture, by Star Academies and Eton College, will help young people achieve A-levels and support them to get to elite universities. There will be 240 pupils a year who will also be given personal development opportunities such as critical thinking, debating, interview techniques and more.

It is part of the Department for Education’s Free School Programme, a process expected to get underway in the next few months, with a view to the college welcoming their first students as soon as 2025. The other two colleges are in Middlesbrough and Oldham.

I don’t think you can ever have enough opportunity and we can never show enough ambition. This is about showing endless ambition and endless opportunity. The more quality education that we can put into the system the better it is for the young people. Dudley is the right place to do this and we are really looking forward to getting going.

These co-ed schools would include access to some of Eton’s best teachers, its clubs and its speaker events. Students will also get help preparing for university applications and interviews.