A Dudley housing boss enjoyed a final bird’s eye view from the top of a high-rise block this week as its demolition begins.

Councillor Laura Taylor scaled the eight floors to reach the top of Manor Court in Netherton, which is due to be taken down along with adjacent Wells in the coming weeks.

She met with contractors on site to find out how they will work to ensure there is as little disruption as possible to nearby neighbours.

This follows the recent successful demolition of neighbouring Arley and Compton Court where contractors used high reaching machinery to bring the block to the ground. 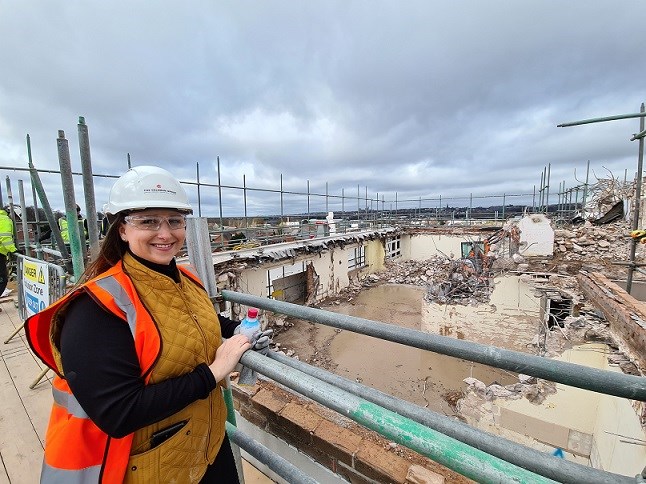 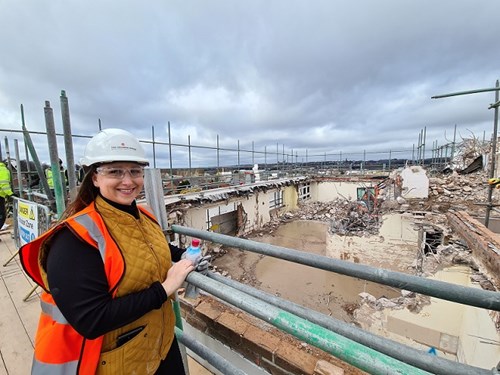 Councillor Laura Taylor at the top of Manor Court

I’m really pleased at the speed in which Arley and Compton Court were demolished and that we’re now able to progress to Wells and Manor.

Due to the proximity of neighbours, Wells and Manor will be demolished in a different way to Arley and Compton. Contractors will demolish the building from within, taking one floor down at time.

The demolition of all four blocks will be a significant milestone in this project, something we’ve worked towards for a number of years.

We’re already in early discussions about the council re-developing the sites for new housing, which could include a new sheltered housing scheme on the site of Arley and Compton. We are still working through options for the Wells and Manor site which will create affordable housing for the area.

Following a survey of the council’s housing stock a few years ago the four blocks, which were built in the1960s, were deemed no longer fit for purpose and it was estimated it would cost millions of pounds to repair them and bring them up to modern-day standards.

The council took the decision to demolish the blocks and it is currently proposed to use the land to create new and affordable homes in the area.

The council has worked closely with residents and since October 2016 more than 180 tenants have moved to better housing.