Fly-tippers were issued a stark warning today that they will be “shamed” across the internet as part of a dedicated CCTV hub showing the faces of offenders caught on camera.

Dudley Council’s You’ve Been Shamed CCTV wall was unveiled today by council bosses in the latest fight against the fly-tippers.

The council has become the first in the West Midlands to share stills from its CCTV network online including the faces of offenders. It aims to not only shame people into not dumping rubbish illegally, but also to encourage residents to help prosecute offenders. 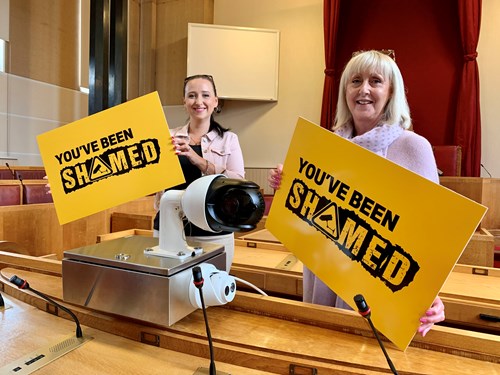 More than £1.7million was recently invested in upgrading the camera network in the borough including ‘deployable’ cameras to target specific hotspots.

The new cameras are capable of capturing detailed images over hundreds of metres.

The stills from the cameras are available on a dedicated web page and are also being shared across social media.

The new CCTV network means there really is nowhere to hide for these criminals. The You’ve Been Shamed wall will hopefully not only shame people into not dumping rubbish in the first place but also help us prosecute offenders through the courts.

The detail in the images, as people can see, is phenomenal which will make it a lot easier to prosecute people.

The people who dump rubbish illegally not only causes a horrendous blight on our beautiful borough but also leaves hard working taxpayers out of pocket. Every year we spend thousands of pounds picking up rubbish that has been left by people who simply have no respect for anyone else.

Through this CCTV initiative we have a real chance of stopping people doing this and if not, recouping some of that money through costs and fines in the courts.

People can share information on fly-tipping with the council anonymously via the webpage, which sits on the council’s website.

The You’ve Been Shamed CCTV wall can be found at www.dudley.gov.uk/youve-been-shamed