Fly-tipping being cleared from beauty spot

A fly-tipping hot spot on a borough nature reserve was being cleaned up this week.

Contractors working for Dudley Council have started work to clear mounds of wood and fencing panels as well as plaster, children’s toys and food waste from an area of Fens Pool Nature Reserve in Brierley Hill.

Much of the waste, mainly behind houses in Fens Crescent, has been there for around a year. 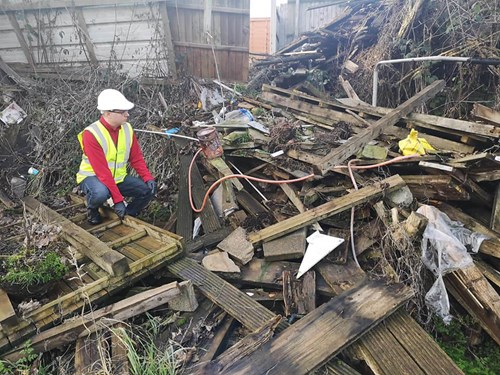 But it is now being tidied up as part of a “deep clean” of the borough promised by council bosses which includes a blitz on fly-tipping.

Fens Pool is such a beautiful site, so it is really saddening and disappointing to see rubbish dumped here by individuals who don’t think or care about the consequences of their actions.

We have made tackling fly-tipping – as part of our deep clean of the borough - one of our priorities as a council.

We will clean up hot spot areas for fly-tipping – and then we will do all we can to find the people responsible and to make sure they go before the courts.”

People can report fly-tipping by calling 0300 555 2345, by emailing dudleycouncilplus@dudley.gov.uk or online at www.dudley.gov.uk. People can also report via Twitter at @dudleyplus or using the Dudley Council smartphone app.