Four of the first homes to be built as part of an ambitious multi-million pound housing project have been sold.

Last year, Dudley Council embarked on a project to build homes for sale for the first time in decades.

It will see the council invest £12.5million to build 79 homes on four developments, 59 being for sale and the remaining 20 available for people on the council’s waiting list.

The first development along Wrens Nest Road in Dudley is already complete and includes eight two bedroom starter homes. Four have already been let to people on the council’s housing waiting list and the remaining four homes have been sold via the Dudley branch of Billingham & Co. 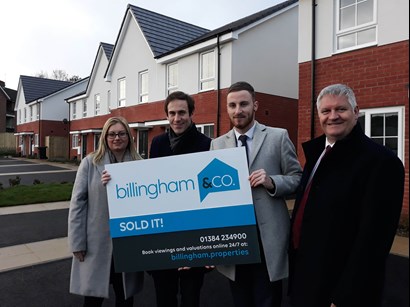 Two sales have already gone through and the sales of the other homes are expected to complete in the next few weeks.

We are committed to building more council homes locally and ensuring that Dudley is a leader in good quality public and private sector housing, working with everyone as we create the Dudley of tomorrow.

These new houses are a great example of what we are doing and this is the first time that we’ve been able to venture into building homes for sale on the open market, so we are very pleased that these fantastic new houses are now complete.

We’ve got the experience and know-how to compete with developers and provide affordable, top quality homes for people just starting out on the property ladder or people looking to move on.

All of the homes are expected to be completed this year so it’s really exciting and encouraging that the first four have sold so quickly.”

We are pleased to be working in partnership with Dudley Council on a number of developments, which offer a variety of homes across the borough.

The properties on Wenlock Gate generated lots of interest and sold quickly and we have had a lot of positive feedback on the quality of the build.”

Properties are also currently being marketed for the second development on the site of the former Amblecote House on Brettell Lane.

Marketed as Red House Mews, the second development will include 20 new homes, 16 of which will be for sale and the rest will be rented. There will be ten three bedroom houses and ten two bedroom houses.

Works has also commenced on a further 51 homes on the sites of the former Mere Centre in Stourbridge and St Thomas’ Network in Dudley.  They will be marketed shortly.

Income made from the sale of the homes will be reinvested in council services for the benefit of all residents.

Further information about the properties