A Government minister has visited Dudley to find out more about a ground-breaking project giving borough residents a say in future plans for town centres.

Baroness Barran, a minister in the Department for Digital, Culture, Media and Sport (DCMS), met five members of the People’s Panel at Dudley Council House. 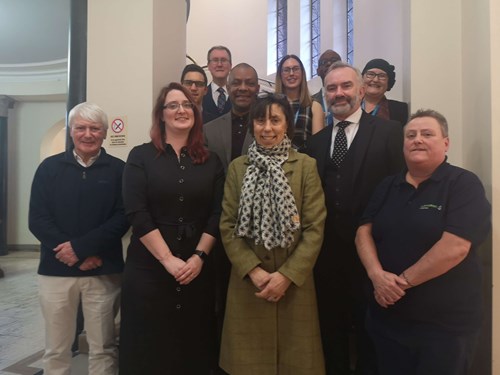 Baroness Barran (centre) with members of the Dudley People's Panel, Councillor Nicolas Barlow (back left) and Dudley Council officers who assisted with the project

The minister was keen to find out more about the Innovation in Democracy pilot project, of which Dudley Council was one of just three authorities in the country to take part.

Dudley People’s Panel, made up of 42 borough residents, was independently designed and facilitated with the support of The Democratic Society. It met to discuss what communities and the council could do to make Dudley and Brierley Hill town centres vibrant, welcoming and places residents could be proud of.

The findings from the panel were published last month, and will be discussed in January by members of Dudley Council’s place scrutiny committee before being considered by the ruling cabinet in February.

We were delighted to welcome the Minister to Dudley and share the positive story of the first ever Dudley People’s Panel.

We feel very proud to be one of only three authorities in the country to be chosen for the pilot project, which gives members of the public more say over decisions that affect them and their communities.

As a council we will use the information provided by the People’s Panel to help us decide what further we can do in the short, medium and long-term to make the borough’s town centres vibrant and welcoming.

I would like to take this opportunity to personally thank everyone who gave up their time and took part, it’s been a really valuable exercise for everyone involved.

We want people to have influence over decisions that affect their community.

That’s why we invested over £500,000 supporting three councils to involve citizens in local decision making.

I enjoyed meeting the local people, councillors and officers who took part in the citizens’ assembly in Dudley.

It was encouraging to hear how valuable they found the experience and I look forward to seeing the positive impact on the town centre in the near future.

Dudley Council successfully applied for funding and support for the People’s Panel from the Innovation in Democracy Programme.

The scheme is jointly commissioned by the Department for Digital, Culture, Media and Sport (DCMS) and the Ministry for Housing, Communities and Local Government (MHCLG). The Innovation in Democracy Programme (IiDP) is trialling innovative methods of deliberative democracy to involve residents in local government decision-making.

In October, letters were sent to 10,000 randomly selected households, inviting people aged 16 and over to register their interest in becoming a People’s Panel member.

Households which received the invitation were able to register their interest in participating. The Sortition Foundation then randomly selected 42 individuals from the pool of responses who broadly represented a cross-section of Dudley’s demographic profile in terms of age, gender, geography, household type, occupation, disability and ethnicity.

Panel members were given £150 via BACS transfer at the end of each weekend - £300 in total – plus expenses to incentivise, retain and recognise their commitment and thank them for their involvement.