Dudley Council has helped bosses at a sheltered housing complex in the town secure lottery funding for a new greenhouse.

Residents at Henry Court, on Charlton Street in the town centre, will now be growing their own pumpkins, sweetcorn, peppers, runner beans, onions, strawberries and much more. 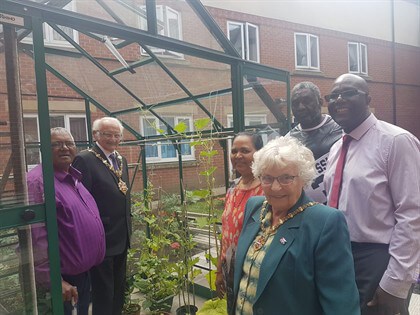 Officers at the council helped staff at the site, which is run by Nehemiah UCHA, submit a successful bid for funding of £2,340 to allow them to buy the greenhouse.

Resident Lance Lewis, 60, who used to live in Upper Gornal before moving into Henry Court, has been leading the way in the growing stakes. But several others are also chipping in, including Dammi Bodalikar under the watchful eye of her disabled husband Mohan.

The produce grown will be used in meals at the complex but will also be shared within the wider community, including at local churches.

We were delighted when we heard we had got the cash, and we’d like to thank the officers at Dudley Council for taking the time to help us with the bid. The greenhouse is part of a lovely open communal area for the residents to sit in when the weather is nice, and it’s been great to see so many roll their sleeves up and get their hands dirty.

It’s given Lance a new lease of life in particular but there are lots of them chipping in, and we look forward to seeing what we are able to grow.

It was a pleasure to attend and see all the hard work that has gone into the garden and the greenhouse since the cash was secured. The successful lottery bid shows what can be achieved when people get together and work together to achieve something.

It will give the residents here something to keep them busy, and some will also be able to learn new skills. I am sure they will enjoy the produce