A world class snooker champion, a youth campaigner and a renowned charity were among the winners in the Mayor’s Civic Awards. 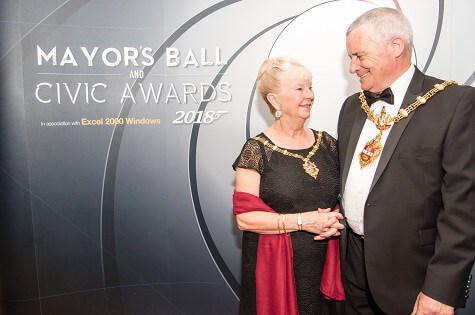 More than 300 people attended the annual ball, sponsored by XL Windows 2000, at the Copthorne Hotel in Brierley Hill, which helped raise thousands of pounds for charity.

During the evening the Mayor presented awards in seven categories all supported by local businesses.

The Mayor’s Pride of Dudley Award went to Mary Stevens Hospice who got the most votes when the award was put to the public online. Mental health campaigner Jon Mansell, from Dudley, and The Retreat Café in Dudley were runners-up.

Bernard Simkins won the runner-up prize for more than 40 years of service to Stourbridge Swimming Club.

Eve O’Connor won the William Shenstone award for environment, sponsored by Jessup Brothers, after helping Halesowen to the gold award in the Halesowen in Bloom competition for the past four years.

Hurst Green Park friends group chair Carol Hackett, from Halesowen, received the runner-up award after helping bring in more than £10,000 of investment to the area and organising a series of clean-ups.

The Thomas Attwood award for education, sponsored by the School Travel Company, went to Maureen Smith, from Brierley Hill, who has dedicated the past 50 years of her life to Old Park Special School in a range of roles from cleaner to carer. Rhys Khan, from Stourbridge, won the runner-up award for his work with Dudley Youth Council helping to promote the important contribution of young people to the borough.

The famous Teddy Grays company won the Mike Holder award for business for promoting the borough all over the world with their historic, global brand. The runner-up award went to Lyn Kimpton who has helped build Stourbridge-based Klick Business Solutions into a thriving business.

The Cedric Hardwicke award for arts, sponsored by the GMB Union, went to Gurcharan Bhujhangy, from Halesowen, who has raised thousands of pounds for charity by organising events. Michael Peters took home the runner-up award for establishing a not-for-profit theatre company for young people.

Captain Andy Peters of the Army Reserve Centre in Dudley won the Frank Foley award, sponsored by the Dodd Group, for community spirit after spending years promoting the work of the armed forces and building links with communities across the borough. Eight-year-old Imogen Shuttleworth, from Stourbridge, won the runner-up award for her charity fundraising efforts raising thousands of pounds for Birmingham Children’s Hospital.

These are amazing people with so many incredible stories to tell. They go about their day helping people and making this borough better, and this is about giving them the recognition they deserve.

Not only that we were able to raise thousands of pounds for charity during the annual ball and I’m extremely grateful to all of the people came, especially the businesses and sponsors who have helped my chosen charities continue their vital work.

The money raised from the night will be split between the Mayor’s three charities – Dudley Mind, YMCA Black Country Group and Dudley Alzheimer’s Society.