Today (September 7), Councillor Karen Shakespeare, cabinet member responsible for the borough’s roads met with a group of horse riders ahead of a local event organised as part of a national campaign to raise awareness of road safety. 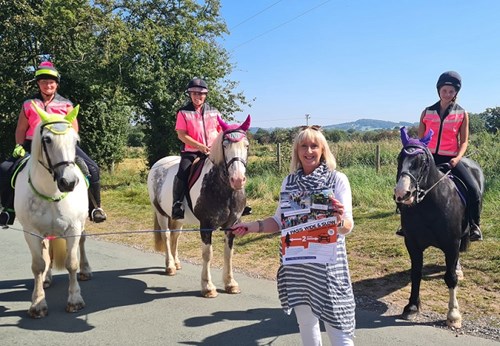 Councillor Karen Shakespeare (front) with from left to right Kate Rogers, Sarah Lutwyche and Abi Rogers who will be taking part in the ride

The Pass Wide and Slow ride campaign was first created in 2018 and aims to educate as many people as possible about how to pass horses safely on roads.

The local event, which is a series of group rides will have more than 40 riders taking part throughout the day and is one of 180 taking place nationwide on September 19.

The hack will go along roads in Stourbridge and also cross the border into South Staffordshire.

Riders in hi-viz vests along with walkers and cyclists will go out along the route at various times throughout the day to raise awareness of the issues horse riders face.

Statistics from the British Horse Society show that two horse are killed each week on UK roads and more than 80 percent of incidents occur because motorists passed too closely.

Our roads are there to be shared by everyone, whether it’s pedestrians, motorists, cyclists or riders and their horses.

From speaking to some of the riders this week, it’s encouraging to know that many drivers do take care, but some people fail to take caution which could have dangerous consequences.

We do have bridleways for riders to use in the borough but to get to them, riders often need to go along roads and quite often these riders are children.

If you’re out on the roads and pass a horse, please slow down and give them and their rider plenty of room.

Our motivation for running this locally is to try and educate as many people as possible about how to pass horses safely on the roads.

Many of us have experienced vehicles speeding past us or driving too close and sometimes that’s through a lack of knowledge about how to safely pass or panicking and not responding to our hand signals, rather than a deliberate act to cause distress.

We’re significantly higher up than most vehicles so we can often see hazards much further ahead than normal road users can and we can indicate this to motorists.

Horses aren’t machines, if they feel threatened, they can become very reactive and where possible a rider will always try and warn people of this.

If people follow our hand signals, give us two metres when passing and pass at a maximum of 15mph it keeps all of us a lot safer.

To find out more about bridleways and other public rights of way in the borough go to https://www.dudley.gov.uk/residents/parking-and-roads/roads-highways-and-pavements/public-rights-of-way/