The Mayor of Dudley is urging people to pay their respects to the heroes of the Battle of Britain at a special service.

Dudley Council will be teaming up with RAF Cosford for the annual service on September 15.

Every year the borough pays its respects to the people who lost their lives in the World War II battle of the skies, as well as armed forces personnel serving today. 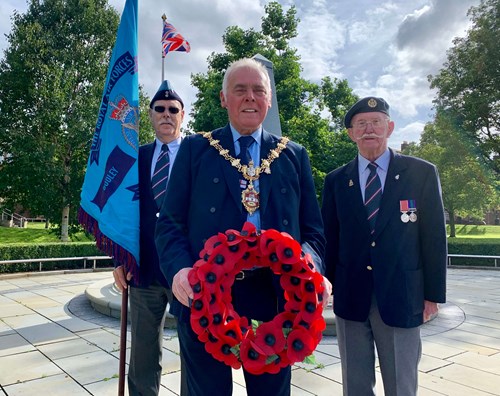 Royal Air Force squadrons from all across the region will join the parade, which will assemble in High Street at 10am, and march from St. Thomas and St. Luke’s church (Top Church).

The parade, stepping off at 10.40am, will be led by Kingswinford ATC band and will be saluted by the Mayor, RAF Cosford and members of the Royal Airforce Association as it passes by.

We are privileged enough to be joined by RAF Cosford again for this year’s parade, further establishing our strong links with the armed forces.

The event is an important reminder of the bravery and sacrifice made by these heroes, and will reinforce the nation’s heartfelt gratitude.”

Following the parade, a service will take place at 10.55am, which will be officiated by Reverend James Treasure.

Residents can join the service at the cenotaph, Ednam Road, which will include wreath-laying and one minute’s of silence. Guests are then invited to the Army Reserve Centre in Vicar Street at 11.30am for refreshments following the service.