Honouring heroes of the skies

The heroes of the Royal Air Force were honoured by the Mayor of Dudley on the 80th anniversary of the famous Battle of Britain.

This week marks 80 years since the Battle of Britain, the fierce air to air battle that took place in 1940 between the Royal Air Force and the Luftwaffe. 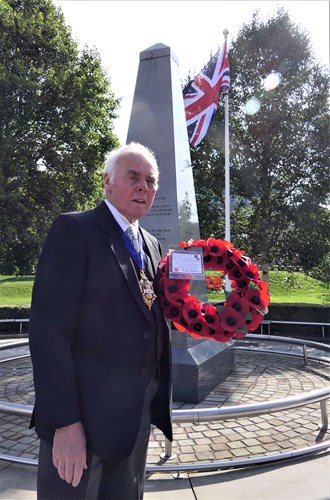 The battle took place over several months and was a pivotal moment in World War II. Thousands of people, both military and civilian, lost their lives due to the ferocious battle, but it was a success and forced the Nazi’s to cancel their plans to invade Britain.

Due to the pandemic the annual town centre parade by the Dudley Branch of the Royal Air Force Association and commemoration service has been cancelled for the first time.

The Mayor of Dudley has laid a wreath on behalf of the citizens of the borough at the cenotaph in Coronation Gardens as mark of respect. The RAF roundel is being flown from both the Council House and the castle keep at Dudley Zoo to mark the anniversary.

Every year the borough pays its respects to the people who lost their lives in the World War II battle of the skies, as well as those armed forces personnel serving today.

Although we sadly cannot mark the milestone anniversary in the way that we had hoped, those people are no less fondly thought of and remembered, as we each commemorate the anniversary in our own way