Dudley Council is one of a number of authorities in the West Midlands delivering the Housing First pilot. 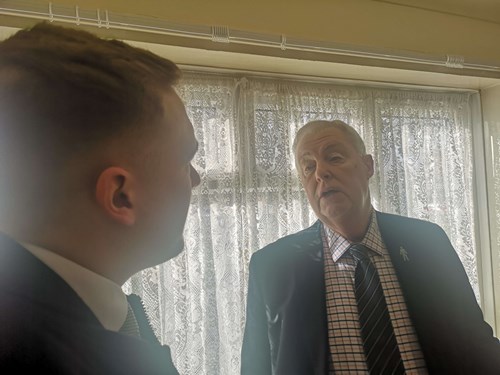 Councillor David Vickers, deputy leader of the council, speaking to the media in Halesowen about the success of the scheme

It launched in 2018 and is changing the way support is given to people who are living on the streets or are at risk of becoming homeless, and who have multiple complex needs.

The project’s aim is to find someone a home first and foremost and then look at what support can be offered to help maintain a tenancy and achieve other ambitions at their own pace.

It aims to help people who have run out of options and have a history of substance misuse, childhood traumas, mental health issues or who have been in and out of the system for years and have been unable to be helped in other ways.

Since its launch in Dudley the project has helped house 19 people, already exceeding its target of 14, and is working with another 6 to find suitable homes. 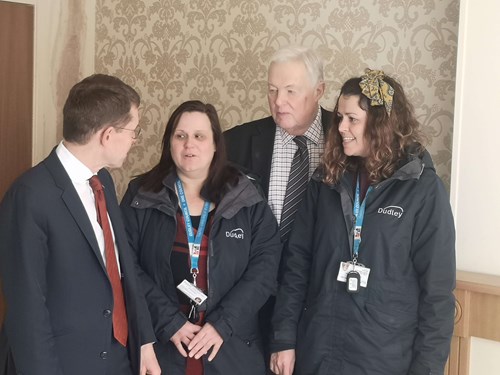 Councillor David Vickers, along with housing officers Diane Kendrick (left) and Annabel Fuidge, speak to West Midlands Mayor Andy Street at a flat in Halesowen currently being renovated to accommodate a homeless person.

This comes on the back of national data released today (February 27) that Dudley’s official rough sleeper count is now four compared to five the previous year.

These latest national figures show that we continue to have low numbers of rough sleepers in our borough and I can assure residents we remain committed to supporting anyone who may be rough sleeping on our streets or at risk of becoming homeless.

Housing First has been a real boost to what we’re already doing in Dudley and has allowed us to give more intensive support to the people that need it to ensure sleeping rough is not their only option.

It’s been a welcome addition and complements the existing work of our homelessness team, which responds every single time a person is reported as rough sleeping to offer them support and emergency shelter should they wish to accept it.

Dudley Council was awarded funding in 2018 from the West Midlands Combined Authority to deliver the Housing First service, and is working as part of a regional partnership for three years to tackle rough sleeping. The pilot is also running in Greater Manchester and Liverpool and will be evaluated across all three pilot areas.