Former engineer, Councillor Alan Taylor is looking forward to forging new community links in his role as Mayor of Dudley.

Councillor Taylor, who has represented Halesowen South ward for 14 years, served as deputy mayor in 2017/18 and took over the role of Mayor tonight (Thursday 17 May.) 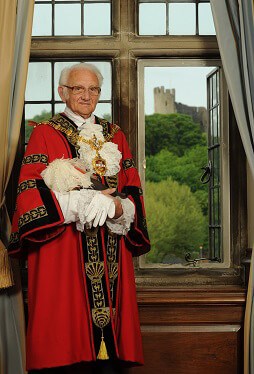 Councillor Taylor, and his wife of more than 60 years Winifred, will be the borough’s first citizens. He trained as an engineer in the fastener industry, before moving into the trailer industry. He served as a councillor on Halesowen Borough Council in the 70s, he is keen on sport and they both enjoy holidaying in their caravan. They have three daughters and four grandchildren, all now grown up

Councillor Taylor has chosen three local charities to support during his year in office, one based in his home town of Halesowen. They are Headway Black Country, specialising in supporting people with an acquired brain injury; White House Cancer Support which supports people with cancer, their families and friends; and The Hope Centre, Halesowen, a charity with a Christian ethos which looks to provide practical and emotional support to people at their point of need.

It’s a real honour to be chosen to serve as Mayor of Dudley and it’s a role Win and I feel privileged to take on.

We’re looking forward to supporting my three charities and are really keen to work with local businesses and organisations to raise as much money as we can for these and other charitable causes.

Councillor Hilary Bills was also named deputy Mayor for the year ahead.

Keep up to date with upcoming civic events and book the mayor for community events.

The Mayor’s charities are:

White House Cancer Support - a charity providing practical help, emotional support and information to people with cancer, their families, friends and carers across the Black Country

The Hope Centre, Halesowen - a non-profit organisation in Halesowen dedicated to charity work, providing a place where people can access activities; social and educational at their point of need and to assist all by supporting, befriending and serving in whatever way possible to alleviate distress, poverty and loneliness