An inspirational soldier, mental health campaigner and single dad from Dudley is set to take on another big challenge after being named as a Batonbearer for the Birmingham 2022 Queen’s Baton Relay.

Sgt. Adam Sefton, a recruiter with the B Squadron Royal Yeomanry, has been chosen to represent the borough in the Queen’s Baton Relay when it arrives in Dudley on Sunday 24 July.

Sgt. Sefton, 37, was selected as a Batonbearer for his phenomenal dedication to supporting Army reservists across the borough and his work to raise awareness of men’s mental health.

Working with two sub-units of Army reservists in Dudley and Telford, he is responsible for pastoral care and employer engagement, overseeing his recruits’ journeys from civilians to trained soldiers. He has helped many recruits who come from troubled backgrounds to flourish as successful reservists.

When forced to adapt his work by the COVID-19 pandemic, Sgt. Sefton stepped up superbly. He volunteered to do two extra nights of work per week to accommodate his recruits when capacity at the reserve centre was limited and even delivered virtual personal training sessions.

Outside of his role, Sgt. Sefton has shown great service to the local community with organisations like Tough Enough to Care, which aims to challenge the stigma around men’s mental health, and the West Midland Reserve Forces’ and Cadets’ Association.

Sgt. Sefton has also overcome many challenges in his personal life, escaping an abusive marriage and eventually taking permanent custody of his sons last year. He juggles full-time work overseeing his squadrons with his most important job as a dad. 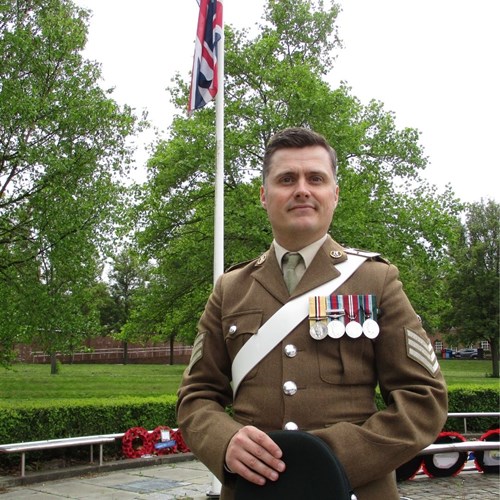 I was really taken aback to be selected as a Batonbearer. It was quite a shock! I’m really honoured and privileged to be representing my organisation, Dudley borough and the Black Country. It’s filled me with pride.

This is a once-in-a-lifetime opportunity and I’m really looking forward to embracing it. After two years of being stuck inside, it will be fantastic to see the community come together again for the Queen’s Baton Relay.

Sgt. Sefton has transformed the lives of many of his recruits and his service to the Royal Yeomanry and the wider community has been outstanding. He combines this with being a dedicated family man and a keen advocate for important issues like mental health.

He is a wonderful representative for our borough and I congratulate him on being selected to take part on Dudley’s behalf in the Queen’s Baton Relay.