A Star Wars themed Lego exhibition on display at Himley Hall has attracted the attention of a publication from a galaxy far, far away.

Jedi News, an online magazine followed by hundreds of thousands of Star Wars fans across the world, interviewed the creator of the exhibition, Amor Lamine, at the former stately home on Saturday. 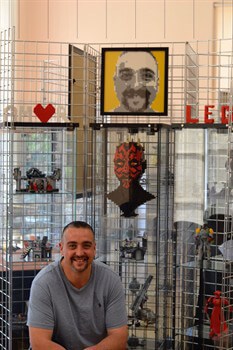 It is hoped the resulting publicity will attract more people to the Dudley Council-owned venue to see what is on offer.

Amor, 45, an electrician from Lower Gornal, took about 18 months to build the collection, which went on display earlier this year.

Star Wars fans can view a series of themed displays including an Ewok village, space station, and a desert and ice plateau staged with figures and vehicles.

Lego versions of gunships, including the Imperial Star Destroyer and Millennium Falcon, a Sandcrawler, AT-AT Walkers and Jabba the Hut’s Palace are featured.

Models made of Lego include Yoda, a life size Darth Maul head and a range of vehicles, including the Death Star. A number of light sabres and official Lego posters are also on display.

People visiting the exhibition will also be able to see other items from the technics and creator Lego ranges such as Sydney Opera House.

Like most children I played with Lego, but my passion was re-ignited around 12 years ago when I received a Lego Darth Vader Imperial Tie Fighter for Christmas.

After that I started to look to see what else was out there and found this whole new world.

I probably spend 20 hours a week building stuff. I have over a million pieces of Lego now and the collection at Himley probably took around 18 months to build.

Hopefully the Jedi News visit will open it up to an even bigger audience.

We are delighted to be able to offer this wonderful exhibition, which will prove interesting to children and adults of all ages.

I’m sure visitors will have fun identifying the Lego versions of their favourite characters, and can try out the new coffee lounge at the same time.

The Amor Lego exhibition runs until September 30. Admission is free.

The hall’s brand new coffee lounge serves tea, coffee, light refreshments and food from 11am to 4pm every Wednesday to Sunday.

As well as the new coffee lounge, the hall continues to offer its pre-booked, and very popular, high-end indulgent afternoon teas on selected Tuesdays and some Saturdays throughout the year.

For details of the exhibition and the new coffee lounge visit the Himley Hall website or call Himley Hall on 01384 817817.