Knitting with pride for England team

A group of Dudley knitters have come together to knit an England scarf for the Duncan Edwards statue despite a disappointing World Cup defeat.

The bronze statue of Duncan Edwards, which sits in Dudley town centre, will have the red and white scarf wrapped around it this weekend ahead of the third place play off against Belgium tomorrow. 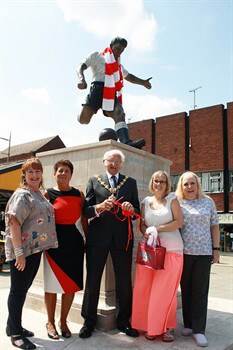 The Knit and Natter group, who meet every week at Needle and Pins haberdashery store at 20 Stone Street, started work on the special scarf after England got through to the semi-final on Saturday.

It is the first time since 1990 that an England squad made it through to the semi-finals and people from across the borough were gripped by the World Cup fever.

We have been inspired by the amazing football and team spirit shown by our boys over in Russia and we felt it was only right that something was given to the statue of Duncan to mark this huge occasion.

The Duncan statue, which was cast in bronze, was created by artist James Butler RA, in 1998.

I am thrilled to see members of the community coming together to celebrate the talent and dedication of our side and I know that our home-grown hero Duncan would have been proud to wear this beautiful home-made scarf.

Despite the disappointment of not making it to the final, the legacy of this fantastic World Cup will live on for many years to come with lots of children and young people no doubt taking a keen interest in playing the sport.

The Knit and Natter group meet every Tuesday at the Needle and Pins store from 10am to 12pm. New people are welcome to drop in anytime and there is no need to book in advance.