The leader of Dudley Council has unveiled plans to help young people into work including creating 150 apprenticeships.

Dudley Council will open its doors to work experience for 16-29 year olds as well as create 150 apprentice posts over three years.

There are also plans to provide work experience for people who have been out of work for more than 12 months, equipping them with vital skills to get them back in the jobs market.

The leader made the job busting announcement at a tour of The Link Academy, his former school, where he chatted with young people about the proposals. 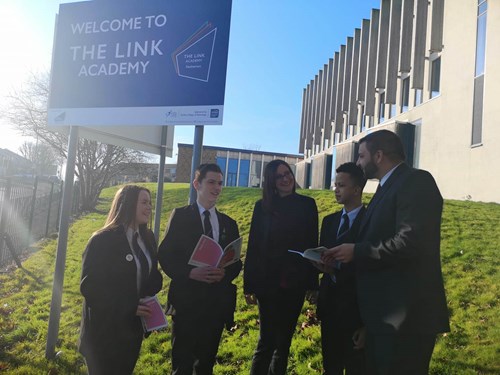 This is a very clear proposal to bridge the gap between people and jobs. We have set ourselves an ambitious target to create 150 apprenticeships over the next three years which will equip people with the right skills they need for the workplace.

The council is a big organisation with a range of trades which young people can explore and places will be available across all areas to make sure we support people into work.

This area of work was one of my priorities when I became leader – supporting our young people, their families, creating jobs and ultimately, growing our local economy. It’s a case of Dudley jobs for Dudley people.”

The council is looking to create 50 apprenticeships a year for the next three years.

In previous years the council has taken on apprentices in construction, horticulture and office administration. In addition to this, the council is drawing up terms for a ‘social value’ contracts framework to ensure that local people benefit from the trade between the council and businesses.

Meanwhile, Dudley Council heads up Black Country Impact for the region, which has helped scores of young people aged between 16 and 29 into apprenticeships and the world of work.