Look out for signs of child sexual exploitation

People are being reminded to look out for signs of grooming and child sexual exploitation, with the launch of the latest phase of a regional awareness campaign today (July 16).

The regional see me, hear me campaign is encouraging adults to make themselves aware of how grooming can develop and the key warning signs to help safeguard youngsters from this hidden crime. 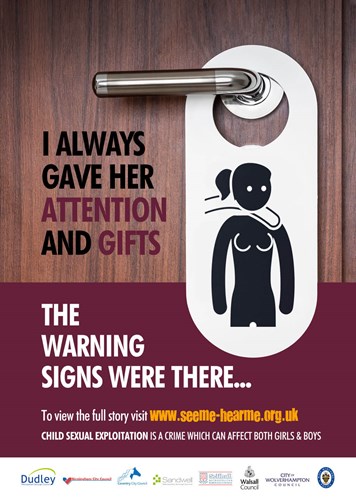 A short animation shows an abuser describing how he grooms a girl with gifts, alcohol and affection before exploiting her. He ends saying ‘the warning signs were there.’

This will be supported by posters inside buses, trams and trains moving throughout the region, as well as poster sites at Metro stations.

More and more people are becoming aware of this hidden crime, but we can’t be complacent. It’s vitally important everyone knows the warning signs and be able to recognise concerns and take action.

We all have our part to play in protecting our children and young people from this horrific abuse.

Being aware of the warning signs is one of our most effective weapons in tackling child sexual exploitation and acting on concerns early can help prevent abuse happening or escalating.

Please visit our campaign website www.seeme-hearme.org.uk to find out more. It contains a wealth of information about CSE and the warning signs to look out for, as well as signposting people to help and support.”

CSE can happen to anyone, regardless of their gender, social or ethnic background. It is child abuse and can involve perpetrators grooming their victims in various ways, such as in person, via mobiles or online, to gain their trust before emotionally and sexually abusing.

Warning signs can include having friends who are older, persistently going missing, secretive relationships with unknown adults, truancy from school, chronic fatigue, constant calls on a mobile phone and the possession of money or new things.

Find out more about child sexual exploitation at www.seeme-hearme.org.uk